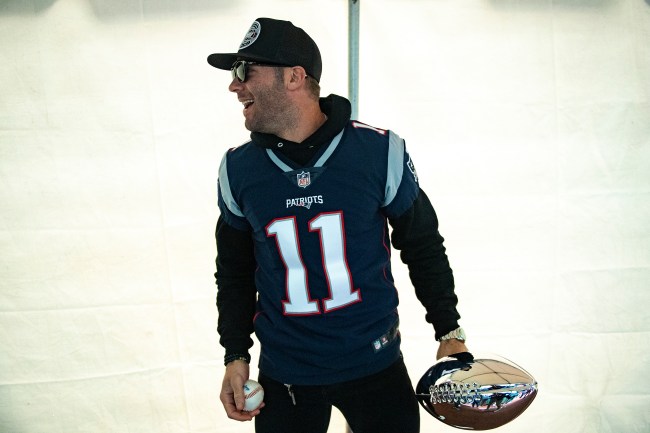 Adriana Lima. Ella Rose. Half of Greater Boston. Julian Edelman picks up more babes than an Uber driver in Tribeca.

The three-time Super Bowl champion attended the Met Gala in New York on Saturday, which I’ve gathered is an event where rich people dress up like Tim Burton characters and take turns kicking poor people in the ribs.

The 32-year-old Edelman appeared to be third-wheeling it on the way to the Gala with some football player and his wanna-be model wife.

Brady, Gisele, and Edelman ALL #METGALA BOUND. MY HEART.

Patriots #metgala x riverdale #metgala. GIVE IT TO ME. pic.twitter.com/6i1Bf97sgf

That changed quickly, as Edelman was caught locking lips (nice phrase, gramma!) with Brazilian model Fernanda Liz. Liz stands one inch taller than Edelman at 5’11” and has been in Brazilian Vogue magazine in between dabbling in bikini modeling. Edelman has been in the entire Patriots cheerleading squad. (I cannot confirm that).

Here Edelman is employing an Alpha short guy move by holding on the top of an SUV, a sure-fire peacocking technique, while pinning Liz against the trunk.

A closer look at the lovely Fernanda.

I mean, despite Edelman always look like he’s packing a wad of long cut in his lip, he’s objectively a stud.

God, if I just worked out a little harder in high school. And my parents were better looking.