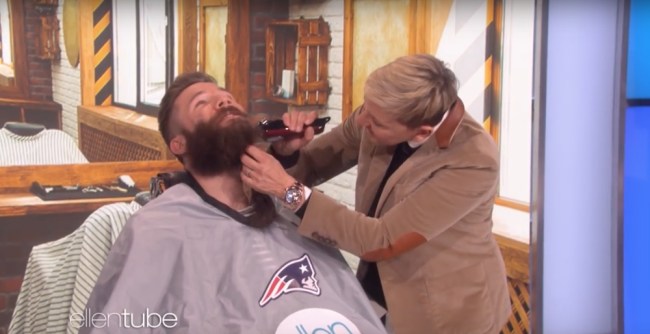 What was I talking about?

Oh, yes, Julian Edelman’s beard. The Patriots receiver has been growing out his face pubes for the entire season, culminating in a Super Bowl victory and an MVP award. He’s let that face bush grow recklessly despite barbs from teammates and former teammates. Danny Amendola said of Edelman’s beard:

“His beard right now is probably the smelliest thing on earth. You can’t even predict what’s in that thing.”

Edelman emphasized that sometimes the beard can be more work than it’s worth.

“Eating is a nightmare. I have to shower after I eat. But you know, sometimes you have something good (grabs his beard), flavor saver.”

Welp, after “nine months of hard work,” as Jules calls it, Ellen DeGeneres came calling. And when Ellen calls, you pick up that damn phone. Ellen said she would donate $10,000 to the Boys & Girls Club of Boston if Edelman let her remove his food catcher on live television (scheduled to air Friday).

My girlfriend is currently in the other room with a sock over the doorknob.

In any event, Edelman did reveal to Ellen how much a Super Bowl MVP meant to him, considering he’s never once made a Pro Bowl.

“Just winning the game is what you want,” Edelman said. “But getting the MVP is kind of a win for me and my other team, and that’s my family. Getting to experience this with them because they’ve been in my corner and they’ve made me who I am. My father was a tough, hard-nosed guy who, you know, didn’t have a father and pushed me to limits I never thought I’d get to. And my mother, being the loving little lady that she is, I was never late to a practice. She was always there.”