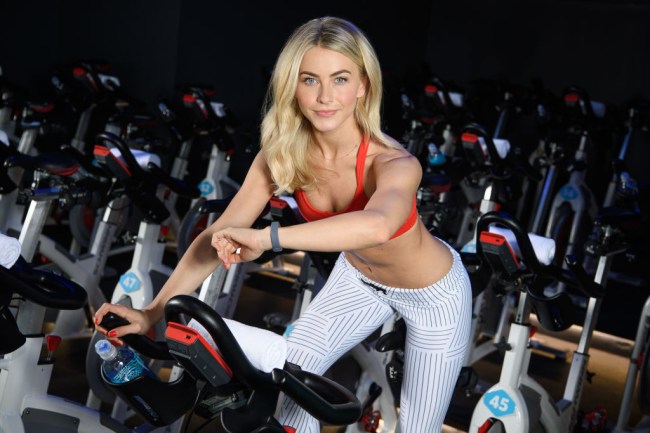 The annual World Economic Forum (WEF) is happening right now in Davos, Switzerland. That is where the elites go every year “to improve the state of the world.” The five-day conference on global issues is attended by top leaders, economists, and Julianne Hough, who was there to undergo some sort of bizarre ritual.

Jackie Schimmel, a comedian and host of The Bitch Bible podcast (What a great name), shared a video of Julianne Hough as the benefactor (or victim) of some sort of exorcism-like procedure.

While most people are at the Davos summit to discuss topics such as the economic and ecological ramifications of single-use plastics and the economic and can cryptocurrency become a global currency, Julianne Hough was receiving an odd and eccentric ritual.

Someone please explain what is going on here? Did Julianne Hough just receive an exorcism that extracted a demon from the Dancing with the Stars champion’s butt? Why is she convulsing and making noises like she had three orgasms? Why does this guy try to pull something from Julianne Hough’s butt? Why is this all happening at the World Economic Forum in Davos?

The video was so batsh*t crazy that I questioned the veracity of the strange footage. But the man performing the ritual said the name “Julianne Hough” and that they were at Davos. Then I went on Hough’s Instagram, and she is indeed wearing the same exact outfit according to her most recent post.

Then there are these tweets stating that Hough is in Davos for the World Economic Forum. Strangely, nobody mentions the butt exorcism though.

Enjoyed my panel with @juliannehough and shared, how we all need to connect with our inner selves, to be truly passionate about our mission. I believe in the collective power of businesses, who can come together to achieve the #SDGs🌈@SAPNextGen #UnitingBusiness #Davos #Wef20 pic.twitter.com/whb5KrXot0

But she’s not just getting exorcisms at Davos, she’s also giving exercise classes that are harder than your most rigorous LA Fitness trainer.

.@juliannehough is helping us unlock our bodies as our language in the #EqualityLounge @ #WEF20! pic.twitter.com/zQt2UYG2SD

So why is Julianne Hough getting what seems to be an exorcism at the World Economic Forum? Apparently, Hough is out in Davos promoting her new dance cardio yoga mediation thing called “Kinrgy,” which is a “45 minute movement experience inspired by the elements. Through dance, meditation, breath work, and strength training, KINRGY focuses your mind, sculpts your body, and ignites your life.”

But this still doesn’t resolve the question as to why Julianne Hough is getting a butt exorcism in Davos. Possibly, this piece of gossip can shed light as to what is going on in that strange video.

According to People magazine, Hough and her husband are “amid marriage trouble.”

Hough’s husband, free agent NHL player Brooks Laich, revealed this week that “one of my goals this year is to really explore like, learning about sexuality.” Julianne is exploring her sexuality through exorcisms, maybe Brooks should give it a whirl.

During the Monday broadcast of his own How Men Think, Laich told his co-host Gavin DeGraw that he doesn’t feel “100 percent fully expressed” in his true sexuality and that he is now taking a “pleasure first” approach to his life.

“People think that sexuality is just the act of sex, of just having sex and there’s so much more to it,” the NHL player said on the podcast.

He then asked: “Here’s a question. This is an honest question for everybody in this room, and every single person listening: Are you fully 100 percent fully expressed in your true sexuality? With your partner? With everything? You could not imagine having a better sex life? Are you truly there?”

Laich answered his own question: “I’m not either. So that’s what one of my goals this year is to really dive into. So then we’re all essentially, that’s a state of suffering.”

Laich then asked: “Do you even know who you are sexually? And I truly, to my core, do not,” he responded. “But I’m super excited about that journey to really learn about sexuality and also get better at the performance of it, but also just the understanding of who I am, who my wife is, that sort of dance.”

Hough and Laich have been married for two years, but according to People magazine sources, the couple “have been having problems for months.”

This could explain why Julianne Hough is in Davos getting butt exorcisms.