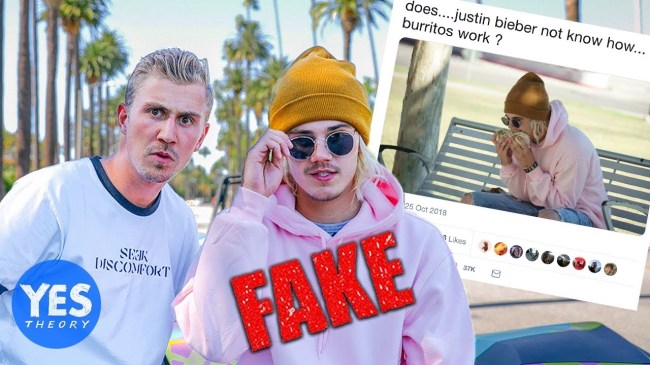 Remember how angry you were last week when you found out that Justin Bieber eats his burrito sideways, like it’s corn-on-the-cob? Turns out that anger was a bit… misplaced.

Turns out we *all* were duped, in a fascinating social/content experiment from on how easy it is to spread fake news.

In a video breaking down the Xs and Os of the stunt, the YouTube channel Yes Theory took credit for the video, explaining how they broke the Internet and news media’s brains in a deliberate, step-by-step way. It’s an impressive mastery of the workings of the viral Internet.

That photo was EVERYWHERE and “divided a nation“, going viral in ways not seen since The Dress. Millions of people to call the singer “a sociopath” for his unconventional burrito techniques.

And it wasn’t Bieber at all.

The way they did it was actually pretty genius: They recruited a Canadian Bieber look-alike and flew him to LA. Then they dressed him up in a wig and outfit exactly down to a tee. He bought a burrito at Chipotle and then they staged the photoshoot at West Hollywood Park.

All it took was a Reddit post on the sub-Reddit /r/MildlyInfuriating for the Internet to start working it’s viral magic and spread the pic. They then lied to the news media trying to source the photo as fact.

The rest is fake news history.

Respect to you guys for taking it so well. All for a good laugh 🙂 https://t.co/mIu4knNeLq

Pretty wild how easy it was to spread such deliberate misinformation about Biebs, with a little outside-the-box thinking. It’s a viral Internet stunt straight from The Chive’s old playbook, like the girl who quit her job at Farmville with a dry erase board.

Bravo on a prank well done. You got us all. And I’m now proud to say I’m a Yes Theory YouTube subscriber.

Just more chaos on the Internet consuming our brains. Here’s a video about exactly how they did it…