Kaitlin Bennett, AKA Gun Girl, Met With Chants Of ‘Sh*t Your Pants’ At USF 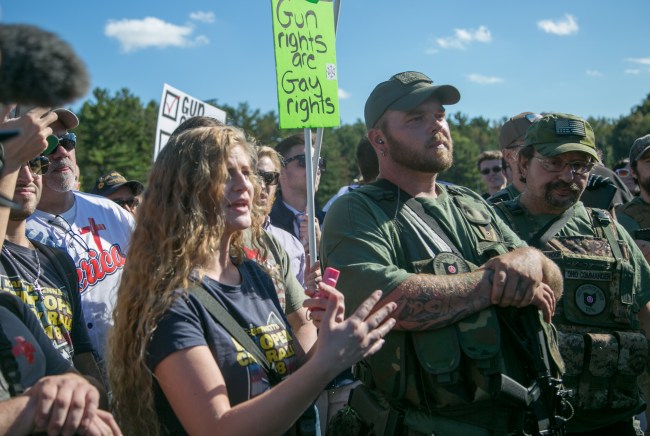 Kaitlin Bennett is back at it, and wherever she goes, whatever she does, I gotta blog it. Sorry, I’m in love with her. I don’t want to be but what choice do I have? We don’t choose the people we love. FWIW, I don’t love who she is as a person; I love the idea of her. I find her mesmerizing. It’s more of an infatuation from afar, honestly. Every time I see a story about her, that song “there she goes… there she goes again” rings through my brain. Here’s the latest:

Crowd chants “shit your pants” at Kaitlin Bennett (aka “gun girl”) at University of Southern Florida, referencing a picture that appears to be her after shitting herself, passed out on the floor. from PublicFreakout

Kaitlin Bennett—aka “Kent State Gun Girl”—ignited controversy on Wednesday when she visited the University of Southern Florida and was met with chants of “shit your pants” from protesters.

Bennett drew a huge crowd to the Tampa university, where she invited students to wish President Donald Trump a speedy recovery from COVID-19 and generally did her best to piss off liberal students and goad them into insulting her on camera.

Bennett appeared perturbed by the “shit your pants” chant at USF, as she can be heard saying, “I need an administrator right now.”

It’s insane to me that she hasn’t figured out how to beat this. For as long as the poopcusations ruffle her feathers, they will continue. The SECOND she laughs about it, leans into it, starts making jokes about soiling her pants, it’s over. It will die! Kaitlin, I hate to reveal the secret key to unlocking your own salvation because I never want this joke to end, but if you appropriate your own insult, it won’t be fun for the haters to use it anymore. Even if it bothers you, fake it! Pretend like you think it’s the funniest thing in the world that you muddied your trousers. Smear pudding stains down the back of your pants before your appearances. WEAR IT, KAITLIN. WEAR IT WELL.

People called me ginger and firecrotch when I was a kid. It upset me. But only because I wasn’t old or wise enough to see the playing field. One day, it all clicked. I started joking about how much sunscreen I need, how pasty my skin is, how disgusting I am to look at, how miserable I am to be around. The same people who had called me ginger for years were like, whoa dude… you’re not that bad. Ease off man. And then I’d say no, no, if I were you guys, I wouldn’t be able to stand being around me either. I’m disgusting, worthless, vile. If I were you, I’d burn me at the stake. And they were like Jesus, uh, we actually like you. And that was the end of that. Easy peasy.

On the flipside, if anyone is pissed off when Kaitlin Bennett comes to your campus, just start the poop chant. That’s all you need. That’s her kryptonite. You don’t need to get angry or invoke social issues or gun control—say poop. Say the word poop and immediately she’ll ask for an administrator (what the HELL is an administrator going to do? Tell a crowd of students to stop saying poop?)

Here’s hoping that my lady love learns to wear her defecate like a badge of honor. We’ve all pooped our pants before. Some people more recently than others.