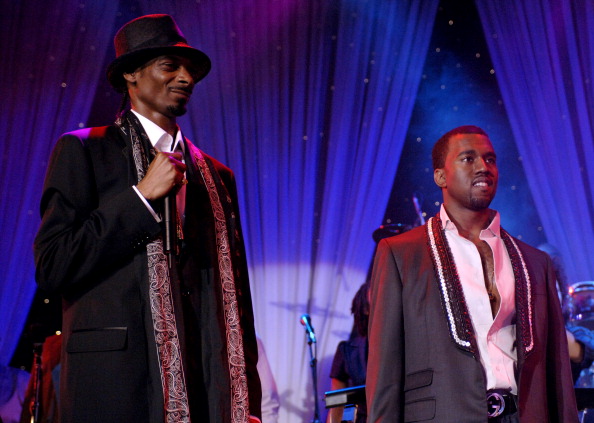 Snoop and Kanye from happier days.

Kanye West and Drake had a bit of an internet squabble recently after Mr. West said Drizzy was “faker than wrestling.” Kanye continued his Twitter barrage aimed at Drake and said that Champagne Papi threatened him and said Drake “picks on people with mental health issues” and mentioned his own bipolar disorder. The internet “fight” inspired Ariana Grande to jump in and try to promote her new song by inserting herself into the conversation, but Kanye called her out for her “insensitive” tweet about mental health and she apologized. Player 4 has entered the game. Snoop Dogg has joined the social media shouting match by slamming Kanye for his Twitter rants.

In an Instagram video, Snoop Dogg said he is getting tired of Kanye West and his tweets as Drake’s From Time bumped in the background. Snoop said Ye and President Donald Trump get along so well because they both “tweet like a mothaf*cka.” Snoop said Yeezy needed an intervention and somebody needs to take his phone away from him so he’ll stop tweeting. Snoop added, that Kanye needs Dr. Phil, Maury Povich or Jerry Springer and then went into a “Jerry! Jerry! Jerry!” chant. Snoop Dogg said that Kanye needed to “go holler” Drake “in real life and “stop telling the whole f*cking world what he was going through.”

Coincidentally, during Kanye’s Twitter tirade from only a few days ago, Ye said, “Snoop is my elder and an inspiration to me.” Let’s see if that is still the case after Kanye sees Snoop’s video calling him out.

Snoop is my elder and an inspiration to me

You have to wonder how Tupac and Biggie Smalls would have handled their beef in the current year where everyone tweets their attacks on other rappers.