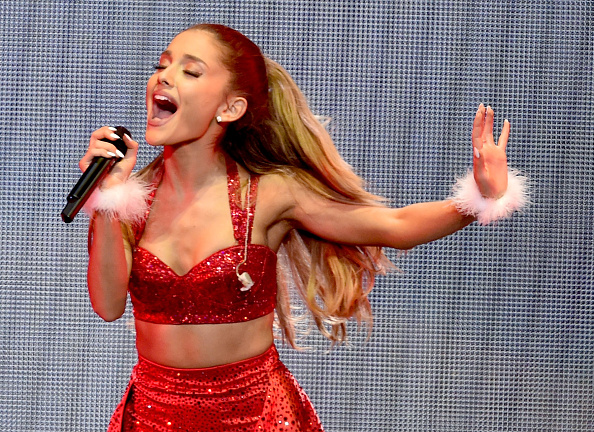 Player 3 has entered the game. Ariana Grande inserted herself into the Twitter and Instagram feud between Kanye and Drake with the purpose of promoting her new song. Which apparently has worked, since here we are. However, Kanye West called out Grande for using his mental health to get attention for her new song Imagine. Speaking of imagining things, imagine getting called out by Kanye West for shameless self-promotion?

Twitter proved it was big enough for the egos of Kanye West, Ariana Grande, and Drake this week. Ariana posted this to Twitter on Thursday in a way to use the ongoing Kanye and Drake beef to promote new songs by herself and Miley Cyrus.

guys, i know there are grown men arguing online rn but miley and i dropping our beautiful, new songs tonight so if y'all could please jus behave for just like a few hours so the girls can shine that'd be so sick thank u

Not exactly sure how Drake and Ye squabbling has anything to do with new music from any other artist except for Drake and Ye. Apparently, Kanye didn’t understand it either and called Grande out for the tweet. In his Twitter tirade against Drake, Kanye said that he threatened him and where he said Drizzy picks on “people with mental health issues.” Then on Saturday morning, Kanye tweeted at Grande and said he “has love” for Ariana, but “until you’re ready to really make sure everyone’s ok don’t use me or this moment to promote a song.”

Ariana has since apologized for her tweet and said it “was a joke which i understand now was probably insensitive. i apologize if i was in any way triggering and hope u feel well today.”

with all due respect, i don't need to use anyone to promote anything. period. i was making a comment ab what men were doing at the time vs. women. it was a joke which i understand now was probably insensitive. i apologize if i was in any way triggering and hope u feel well today.

“With all due respect, I don’t need to use anyone to promote anything” – Ariana Grande.

Ariana Grande's New Song Is Probably About Mac Miller, So Here Are All The References https://t.co/D5AubBLJjQ

Ariana Grande opens up about her exes Big Sean, Mac Miller, and Pete Davidson on her new song "thank u, next." Listen: https://t.co/h1QkHtHkm4 pic.twitter.com/UIogrjMy2B

She also noted that she hates the internet.

anyway i hate the internet so much. sending love. but like bye.

The pop singer also said for everyone to “stop weaponizing mental health. everyone.”

Kanye continued to tweet about mental health and thanked Gucci Mane and Quavo for releasing the song titled BiPolar, which he said was “destigmatizing mental health.”

Ariana’s ex-fiancee Pete Davidson opened up about his own battles with mental health after the couple broke up. Stay tuned for more important discussions about mental health from these experts.