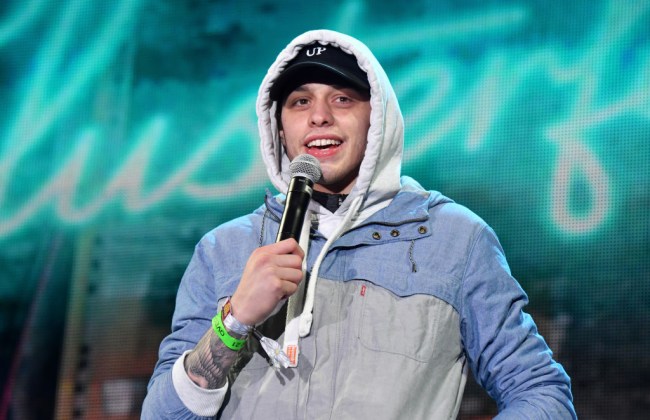 The past few months have been one hell of a ride for Pete Davidson, who went from being “that guy from Saturday Night Live” to “that guy who’s engaged to Ariana Grande” virtually overnight.

The happy couple and their matching tattoos were thrust into the spotlight as the relationship unfolded in the press before everything came crashing down in dramatic fashion.

After securing custody of the teacup pig they’d been planning on raising together, Grande went scorched earth on the comedian after he joked about the breakup on an SNL promo and stumbled across the name of her newest song in the process.

This would kick off a particularly difficult month for Davidson, who caught a bunch of heat after making an ill-advised joke about a wounded Navy Seal veteran (who would eventually get the last word).

Totally cheap, disgusting and classless of SNL to have Pete Davidson mock Dan Crenshaw for wearing an eye patch…then giggle that he was injured in the line of duty.@DanCrenshawTX is a Navy SEAL and hero who lost his eye in an IED attack in Afghanistan. pic.twitter.com/7VbMohQ3t2

However, the wrath of Political Twitter pales in comparison to that of one group of people who will go to the ends of the earth to vanquish their enemies: Ariana Grande fans.

Davidson has been forced to weather a hurricane of negativity at the hands of Grande’s most fervent supporters, who have spent the past few weeks lobbing abuse his way while blasting the new anthem of their queen.

While Grande had no problem addressing the fallout of the relationship, Davidson was decidedly quiet on the matter.

It took a while but he decided to break his silence on Monday by taking a moment to get very real on Instagram, where he revealed the true impact the vitriol he’s faced has had on his mental health.

Davidson’s year is basically a case study highlighting the dangers of the toxic culture that permeates the internet and this message is a sobering reminder that there are real, actual people who are impacted by virtual abuse.