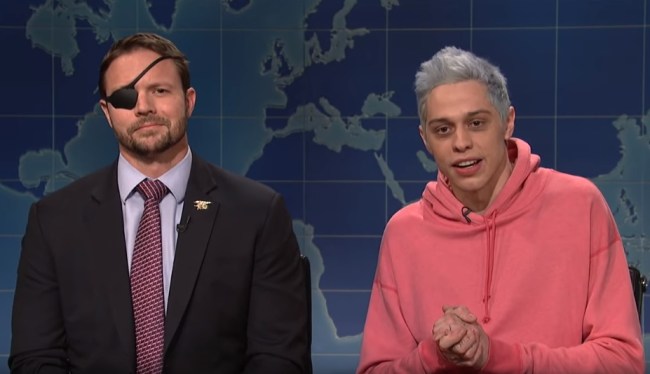 Today is Veterans Day. A national holiday happens on every November 11th, that coincides with the anniversary of the end of World War I which occurred on November 11, 1918. The day is to celebrate, remember, and honor military veterans who valiantly served in the United States Armed Forces. On this Veterans Day, retired Lieutenant Commander Dan Crenshaw urged everyone to never forget those brave men and women who served the country during war and peace in a surprise appearance on Saturday Night Live. Cresnshaw also roasted Pete Davidson for joking about him losing an eye while serving the country.

The wounded veteran lost his eye from an IED in Afghanistan and went through some excruciating recovery only to go on TWO more deployments after his life-changing injuries. The week has been full of hot takes on whether Davidson should have made the joke or not and if there should be some sort of punishment for it. Even Davidson’s castmate Kenan Thompson said the joke “crossed the line.”

Crenshaw, to his credit, didn’t want an apology from Davidson or SNL and didn’t want there to be any repercussions because the nation as a whole should stop demanding apologies. But Crenshaw did note that “veterans across the country probably don’t feel as though their wounds they received in battle should be the bad punchline for a bad joke.” Crenshaw did mock Davidson for the joke, “the real atrocity in all of this — it wasn’t even funny… it wasn’t original… it wasn’t funny.” He did challenge SNL to donate money to charities that assist veterans.

Texans are hard working, love their country and believe in the American ideal; the greatest set of ideas for a free people that the world has ever known. As a team that was the message we spread for the last year.
Thank you for your dedication and trust. See you in Washington! pic.twitter.com/nocUg0ycqJ

On last night’s SNL, Davidson apologized to Crenshaw to his face in a great moment. “In what I’m sure was a huge shock for people who know me, I made a poor choice last week,” Davidson said before Dan joined him on the set. “I made a joke about Lieutenant Commander Dan Crenshaw, and on behalf of the show and myself, I apologize.”

“I mean this from the bottom of my heart. It was a poor choice of words,” Davidson said. “The man is a war hero and he deserves all of the respect in the world. And if any good came of this, maybe it was that for one day the left and the right finally came together to agree on something: that I’m a dick.”

Then Crenshaw appeared and he accepted Davidson’s apology. Then the Navy SEAL was given a chance to roast Pete for his physical appearance. Taking aim at Davidson’s blue hair, Crenshaw called Pete the human embodiment of the blue meth in Breaking Bad and a troll doll with a tapeworm. The military veteran then compared Davidson to Martin Short as Jack Frost in Santa Clause 3, but noted that “one of these people was actually good on SNL.”

The real dagger was when Crenshaw’s phone rang and it had Ariana Grande’s song Breathin as the ringtone and the Navy SEAL let the phone ring and ring and ring. Savage.

Then the mood turned serious and Crenshaw delivered a great message about unity and appreciating veterans. “But seriously, there’s a lot of lessons to learn here,” Crenshaw said. “Not just that the left and the right can still agree on some things, but also this: Americans can forgive one another. We can remember what brings us together as a country and still see the good in each other. This is Veterans Day weekend, which means that it’s a good time for every American to connect with a veteran.”

The Navy SEAL encouraged people to not only say “thank you” to veterans” but to say “never forget” to a veteran.” “You’re implying that as an American, you are in it with them, not separated by some imaginary barrier between civilians and veterans, but connected together as grateful, fellow Americans.”

Dan then gave a heartfelt dedication to Pete’s father, Scott Davidson who was a New York City firefighter who died in the September 11 terrorist attacks. “And never forget those we lost on 9/11, heroes like Pete’s father,” Crenshaw said. “So I’ll just say, Pete, never forget.”

In an era of political divisiveness, it’s outstanding to see Crenshaw and the writers and cast of Saturday Night Live turn what was a bad joke into a real moment that teaches forgiveness and to love one another no matter their politics. That’s what America should be about. We can argue about politics and disagree, but at the end of the day we are all Americans and that should come above all of the other nonsense and noise.