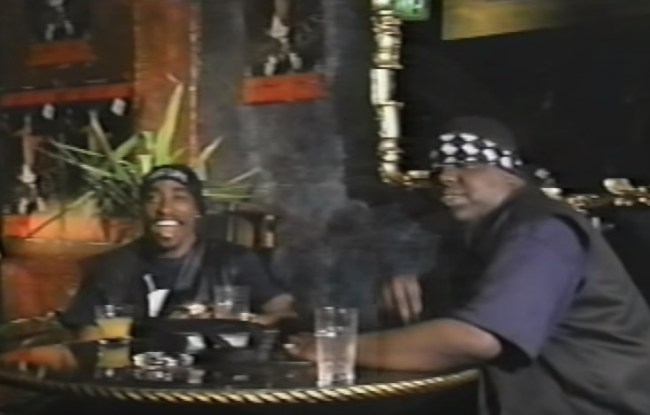 The mystery of the unsolved murders of Tupac and Biggie Smalls could have been broken open by an unlikely source — Tom Sizemore. According to the Hollywood actor, he has inside information that fingers Suge Knight as the mastermind who orchestrated the deaths of Notorious B.I.G. and Tupac Shakur.

“Bombshell” FBI files obtained and published by The Sun claimed that Sizemore informed FBI that he knew who was behind the premeditated murders of the two hip-hop legends.

In 2004, Sizemore allegedly met with FBI agents because he knew who was behind the lethal shootings of Tupac and Biggie, real names Lesane Crooks and Christopher Wallace respectfully. During the FBI interview at a Fatburger restaurant in Los Angeles, Sizemore informed federal agents that Suge Knight arranged the murders of Biggie and Tupac. According to Sizemore, a gang member named “8-Ball” told Sizemore that Suge planned the deaths of Tupac and Biggie. Sizemore promised to forward the phone number of 8-Ball to the authorities according to the transcript.

This goes against what Tupac’s friend said two months ago when he alleged that Suge had nothing to do with Tupac’s death. Former Outlawz rapper Napoleon, now Mutah Wassin Shabazz Beale, discussed Tupac’s mysterious murder and said he actually saw the bullet or shrapnel wound that Knight suffered during the drive-by shooting that ended Shakur’s death. Two months ago, Marion “Suge” Knight pleaded no contest to voluntary manslaughter and was sentenced to 28 years in prison for the 2015 fatal hit and run of Terry Carter.

Shakur attended the Bruce Seldon versus Mike Tyson boxing match at the MGM Grand in Las Vegas on September 7, 1996. Shakur and Suge left the heavyweight fight in Knight’s 1996 black BMW 750iL car, which was on auction two years ago for $1.5 million.

The BMW that Tupac was riding in when he was fatally shot is now officially up for sale and is currently listed at a steep $1.5 million. pic.twitter.com/fh6gF1fwSh

A white Cadillac pulled up next to the BMW and then sprayed Knight’s vehicle with bullets. Suge was hit with shrapnel and 2pac was struck with four rounds including twice in the chest. Shakur died from his injuries from the drive-by six days later. Still to this day, Tupac’s killer has never been identified or brought to justice.

At the height of the East Coast–West Coast deadly rap rivalry, Biggie Smalls was also murdered by way of a drive-by shooting. The Notorious B.I.G. was a presenter at the 11th Annual Soul Train Music Awards in Los Angeles. The legendary rapper attended an afterparty at the Petersen Automotive Museum and left after the bash was shut down by the Los Angeles Fire Department because of overcrowding. At 12:30 a.m. local time on March 9, 1997, a black Chevy Impala pulled up alongside Wallace’s GMC Yukon truck and shot up the SUV. Wallace was hit with four bullets and rushed to Cedars-Sinai Medical Center, but he would be pronounced dead at 1:15 later that morning.

Sizemore, the actor best known for his roles in Saving Private Ryan and Blackhawk Down, also revealed how he wanted to help agents “take down” a crystal meth warehouse run by the Mexican mafia. Sizemore was personally invested in shutting down the crystal meth factory because his sister got addicted to the drug and was willing to wear a wire.

“Because his 19-year-old sister recently was hooked on crystal meth, Sizemore will wear a wire or provide any information to help solve the Biggie Smalls murder as well as lead the FBI to take down the largest crystal meth house in California, which he stated as being run by the Mexican Mafia out of a warehouse,” the newly unearthed FBI report states. “Sizemore stated his stepfather was a Detroit police officer and admires the work of law enforcement officers,” according to the FBI file.

The Sun was provided the FBI interview by movie producer and investigative reporter Don Sikorski, who is the co-executive producer of the hit cop show Live PD as well as two documentaries about Biggie’s tragic death titled Who Shot Biggie & Tupac? and the upcoming 2019 release City of Lies. The file that includes the Sizemore interview was created by Phil Carson, the former head of the FBI field office in Los Angeles. The FBI file by Carson, who is now retired, also presents possible clues that the LAPD may have been involved with Biggie’s murder. Sizemore said he was once at a party with Sean Penn when two off-duty Los Angeles Police Department officers told the actors that they “could take anybody out and nobody would ever know.”

It should be noted that Tom Sizemore has a lengthy and well-documented battle with drug addiction since he was 15-years-old and a rap sheet that includes battery against women. On March 25, 2005, Sizemore was sentenced to seven months in jail and four months in drug treatment for repeatedly failing drug tests while on probation and attempting to cheat on urine tests by using a Whizzinator. Sizemore was a cast member of Celebrity Rehab with Dr. Drew in 2010. Sizemore, who is now 57-years-old, told agents that he met Knight at an Alcoholics Anonymous meeting once.