LISTEN: Suge Knight Says Dr. Dre Put A Hit On Him Causing Him To Run Over A Man In New Interview From Prison 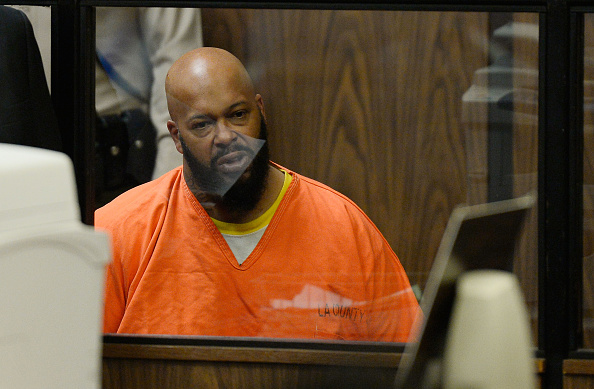 Suge Knight is expected to be sentenced on Thursday to 28 years in prison for killing a man and injuring another by running them over with his truck in January of 2015. Two weeks ago, Marion “Suge” Knight entered a plea of no contest to the charge of voluntary manslaughter in his murder trial of Terry Carter. In a new interview from prison, Knight blamed his nearly three-decade prison sentence on Dr. Dre, who he claims put a hit on him.

UPDATE: Marion “Suge” Knight pleaded no contest to voluntary manslaughter on Thursday and was sentenced to 28 years in prison for the 2015 fatal hit and run of Terry Carter.

The 53-year-old rap mogul gave an interview to The Blast this week where he accused Andre Romelle Young AKA Dr. Dre of hiring assassins to kill him on at least two occasions.

Suge notes that there was a gun at Tam’s Burgers in Compton, California, which was the murder scene. It should be noted that security camera footage shows Suge using his F-150 pickup truck as a weapon to run over Carter and Cle “Bone” Sloan, who is a security guard. It should also be noted that the burger joint is near where the N.W.A. biopic Straight Outta Compton was being filmed. Knight was angry about how he was portrayed in the Straight Outta Compton and even threatened the movie’s director F. Gary Gray last year.

“They also got the paper trail with all the checks and proof of when they talked to the witnesses saying that Dre came to them first and asked the two guys how much it cost to get rid of me,” Knight claims. “And they said, ‘What you mean by get rid of?’ And he said, ‘Kill him.’ That’s when they start coming up with prices.” Knight alleges that this is all a “murder-for-hire case.”

Knight also alleges Dr. Dre paid hitmen with a personal check, which isn’t exactly a wise move if true and seems like something that could be easily verified.

Knight says Dre signed a lifetime management deal with him that entitled Suge a 30% cut of all Dre’s future entertainment earnings. That would mean that Suge would receive a huge chunk of Young’s gigantic deal when Apple bought Beats Electronics for $3 billion. In 2016, Knight sued Young for $300 million, or 30 percent of Dre’s $1 billion take in the sale of Beats to Apple.

For years, Suge has believed that Dre paid hitmen to assassinate him so that he could avoid paying Knight a massive cut of his gargantuan Apple payday. In 2016, Knight’s lawyer Thaddeus Culpepper said Dre paid a man named Dwayne “Knob” Johnson to carry out an armed assault on Knight at Tam’s Burgers and Suge “accidentally” ran over Carter.

The Death Row Records boss also alleges that Dr. Dre paid an assassin to kill him in August of 2014. Suge was shot seven times while at a nightclub called 1OAK where Chris Brown was hosting a VMA party. Knight survived after being shot in the abdomen, chest, and left forearm, but he has suffered health complications from his wounds.

During Knight’s latest interview, Knight was asked why he entered a plea of guilty to voluntary manslaughter and agreed to a prison sentence of 28 years, which could keep him in jail until he’s 70.

“So when they gave me an attorney, he seen me two times in eight months and told me he went to the court and said he needed help and other attorneys,” Suge explains. “And they told him no. He said no way he can do my trial because he really don’t know the case and he won’t win.”

The hip-hop mogul continued, “So if somebody stacks the deck against you, to the point where they’re not trying to fight for you, and let you get the attorneys you wish to have, what can you do?”

You can watch the Suge Knight interview below.

In other Suge Knight related news, his son, Suge Knight Jr., claims that Tupac Shakur is alive and living in Malaysia.