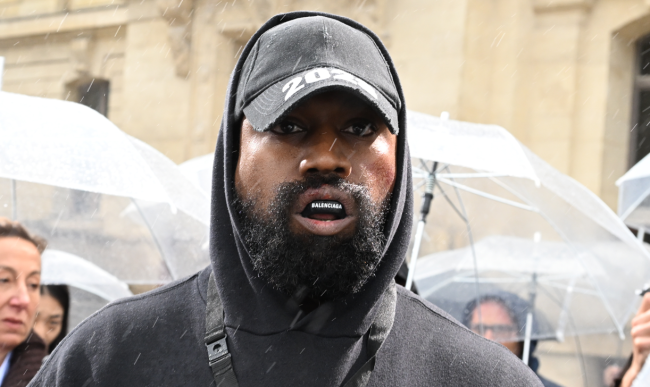 Kanye West shocked several adidas executives during a recent business meeting when he whipped out his phone and showed them an adult film.

Included as part of a YouTube video he posted on Sunday, Kanye West is seen at the meeting with two of his representatives and two adidas execs sitting on black stools in a semi-circle.

Everyone except for Kanye in the clip from the video titled “LAST WEEK” (which stars at the 10:25 mark) has their faces blurred.

After Kanye holds out his phone horizontally in front of the two adidas executives one of them asks the rapper, “Is this a p–n movie?”

Undeterred, Kanye continues to hold his phone showing the video close to the businessmen’s faces.

“Come on, man. Come on,” one of them finally says while pushing West’s phone away.

Page Six claims, “The apparent point of the X-rated film was to draw a parallel between its plot and West’s business dealings with the activewear company, which handles the manufacturing of and distribution for his billion-dollar Yeezy brand.”

West sort of confirms this reasoning when he tells the adidas executives, “The whole concept of this video is that the guy had cheated, so then the girl was like, ‘Well then I’m going to do the thing that’s your worst nightmare.’

One of the adidas executives, obviously confused, then asks West, “Is it your dream, or is it a nightmare? What are we doing?”

To which one of Kanye’s reps explains, “What you’re feeling right now is extreme discomfort, and that is exactly the point because when someone steals this man’s ideas, his creations, it’s like you’re stealing a child. These are all children of his mind, and you’ve kidnapped them.”

Then he storms out of the meeting in a huff.

Maybe Stephen A. Smith was right.