Kanye West Is Quite Literally Pissing On His Legacy 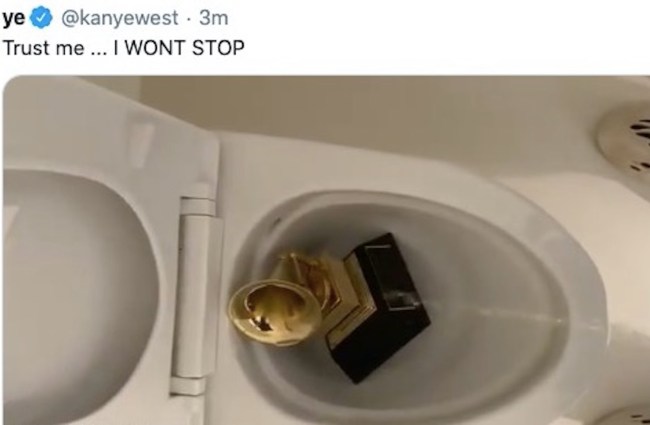 Hooooooo buddy, the rapper formerly known as Kanye West is having himself a DAY on Twitter dot com. After spending the morning claiming that “white media” “took down” R. Kelly, Bill Cosby, and Michael Jackson and uploading pictures of his music contracts, Kanye West is now literally pissing on his own legacy, as he’s posted a video of what appears to be himself pissing on a Grammy Award. For someone who calls himself an artist, this metaphor is painfully on the nose.

Trust me … I WONT STOP pic.twitter.com/RmVkqrSa4F

West is clearly going through another one of his practically-patented Twitter episodes, as he’s easily tweeted over 100 times this morning alone, with a majority of those tweets being photos of his contract with Universal Music Group, excerpts from the bible, and references to his “masters”. You know, just casual Wednesday morning stuff from QAnon-ye West.

Whatever Kanye seems to be going through, we can at least all agree that it’s an improvement over his recent brief foray into politics, where he held a rally in South Carolina and yelled about Harriet Tubman not actually freeing the slaves.

The Kanye West cycle definitely seems as though it’s repeating itself, as these sorts of meltdowns are usually followed by an announcement that he was off his meds and that he’s got an album on the way. Remember when he claimed he was dropping an album titled Donda: With Child earlier this summer? Whatever happened to that?

It’s a shame, too, because I was listening to Graduation a couple of weeks ago while on a jog and I was overcome by this immense feeling of sadness about what Kanye West has become. That three-album stretch that launched his career — College Dropout, Late Registration, and Graduation — was as complete of a run from any musician that I’ve listened to in my lifetime, and now, West is more of a sideshow than he is a rapper.