Keanu Reeves Talks About How Long He’ll Play John Wick, Being The Nicest Guy In Hollywood 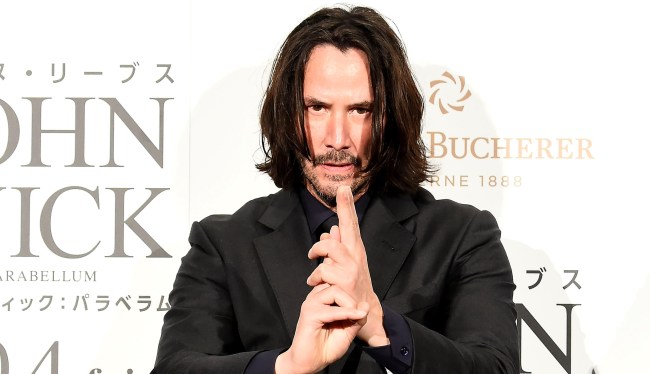 Keanu Reeves has been on fire lately with films like the John Wick films, Bill & Ted Face the Music, and upcoming The Matrix sequel all either hitting theaters or in production.

Throw in some work for The SpongeBob Movie: Sponge on the Run, Between Two Ferns: The Movie, Toy Story 4, and Always Be My Maybe, and the 55-year-old actor, who has been involved in 19 different films since 2016, has never been busier.

In a new interview with OK! Magazine Reeves talks about how long he thinks he will play John Wick and his well-earned reputation for being one of the nicest stars in Hollywood.

When asked how he manages to stay so grounded in an environment where that can be difficult to do, Reeves replied, “I love what I do, and I love going to work. I like being creative. And we’re all in it together, so why not have some fun?”

With the fourth John Wick film scheduled for release in 2022, and with plans to shoot John Wick 4 and John Wick 5 back to back, Reeves admits that there may be even more John Wick movies on the horizon.

“As far as my legs can take me. As far as the audience wants to go,” he said recently about how far he’d be willing to go playing the assassin.

“Neither [David Leitch or I] us hides from the the fact we were stuntmen,” Stahelski told Collider. “I’m pretty proud of it, like, cool. But we certainly don’t try to hide it.

“Like we’re just directing and we deal with that, like, ‘Yes, I want to make action movies.’ I think Dave and I were both good at what we did as stuntmen and as choreographers. So, we don’t want to lose that. I want to be cool with the action. I want to be a better director, but that doesn’t mean I want to do less action or have less to do with the action.

“I guess the third one just felt like I needed a place to go after number two, and I had these ideas. It kind of became that wacky action movie. There’s been a couple days where I’ve decided to do number four and I’ve woken up in a cold sweat going, ‘Horses! How do I beat horses?!’ Like, I have no f***in’ idea, to tell you the truth. […] I think I have a lot of really cool ideas for the next one that I think are different and shocking and fun and unique. How to do them, I have no f***in’ idea right now. I’m still figuring it out.”

Maybe they can take Charlize Theron up on her desire to see her Atomic Blonde character in a crossover film with John Wick. That is something that would definitely be worth watching.

Reeves also discussed working with Alex Winter again after all these years on his new film Bill & Ted Face the Music, working with Tilda Swinton, Shia LaBeouf, and Djimon Hounsou on the now cult classic Constantine which just turned 15, his 1991 film Point Break, and 1994’s Speed with Sandra Bullock. Check it all out here.