Keanu Reeves Weighs In On Who He Thinks Would Win A Fight: John Wick Or Neo 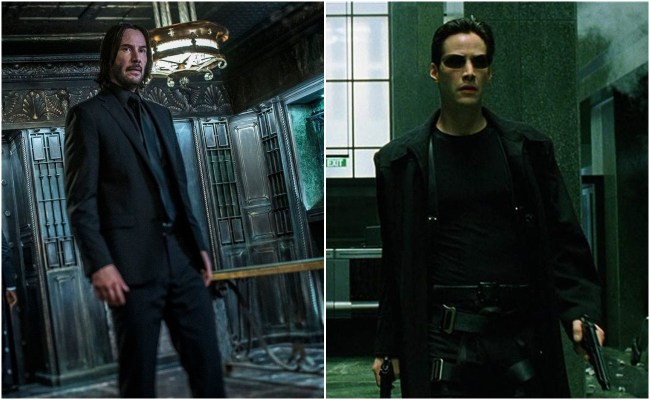 Okay, now, I would like to point out that we ran an entire series about finding the perfect matchup for Keanu Reeves and Neo was not it. I mean, quite literally, I wrote a whole ass and frankly awesome article about it and included a poll that the readers could vote on and Neo came in fourth behind James Bond, “any Jason Statham character”, and “other” (he did, though, finish ahead of Daredevil). Here was my reasoning behind the Neo entry:

Neo is particularly tricky as he exists in a world entirely different from our own, so some guidelines would need to be put in place prior to the battle (like no flying, for example). But in terms of skillsets, the matchup is pretty on point: both excel at close-quarters hand-to-hand combat in addition to gun warfare. The only hurdle here is leveling the playing field to account for Neo’s superhero-like skills.

Then, not only did we (we as in me and you, dear reader) decide the ultimate challenger for Wick, but then we tossed the two in the gaunlet — both wearing bulletproof suits — and imagined the result if they fought to the death.These articles of some of the most enjoyable I’ve ever written here at BroBible, so I hope you’ll give them a read.

Now, back to Stephen Colbert and The Late Show stealing our bit Keanu Reeves weighing in on who would win a in fight between John Wick and Neo, who, of course, had a very Tao of Reeves take on the scenario.

“Well, No. 1, they wouldn’t fight. But maybe John Wick would try and help Thomas Anderson out in the real world. Maybe against the machines,” Reeves said.

While Reeves’ ability to sidestep late night talkshow questions with pure zen should always be commended, the correct answer is Neo because he essentially becomes digital Superman by The Matrix Revolutions.