Who Would Win In A Fight: John Wick Or James Bond? (Both Wearing Bulletproof Suits) 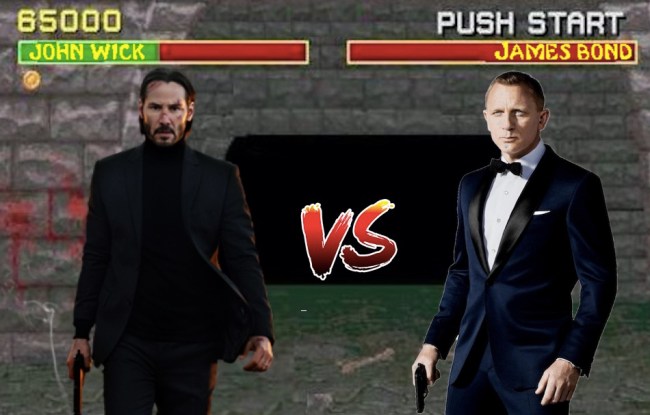 Well, my anonymous internet friends, the day has come — it’s The Big One.

When I began these hypotheticals a few months back — before our newfound way of life began — I was merely doing so because, frankly, I’m a massive movie nerd and I like to share my thoughts and opinions with you, the readers. What’s the purpose of having an opinion if you can’t discuss it with anyone, you know?

But whether it be because of our current indoor conditions and therefore the increase in movies we’re watching, or because I’ve tapped into some part of the male brain that purely enjoys pondering an imaginary battle between two iconic movie characters, these action hero hypotheticals have turned into some of our most-engaged-with content on social media. In fact, I got more emails about my previous John Wick article (where we voted on which movie character would be the best matchup) than any previous post I’ve published on this wonderful website.

Another thing I immediately noticed, other than the fact that our audience seemed to be enjoying the hypotheticals, was that no matter who the matchup was — it could be Maximus vs. Achilles or or Leonidas vs. William Wallace or Jason Bourne vs. Ethan Hunt — and people would still answer John Wick.

Trust me, of course I’ve wanted to include Baba Yaga in one of these — I just couldn’t think of the right matchup. Such is the unique badassery of the John Wick character. So, instead of trying to figure out the best opponent on my own, I gave the choice to you all, the readers.

PREVIOUSLY: Which Movie Character Would Be The Best Matchup In A Battle To The Death Against John Wick?

I presented who I thought to be the best options: Daredevil, Brixton from Hobbs & Shaw, literally any Jason Statham character you want, Neo, and James Bond. And after over 1000 votes, the winner was  — in a narrow victory over Jason Statham — James Bond. For what it’s worth, the most popular write-in characters were Punisher and Jason Bourne. 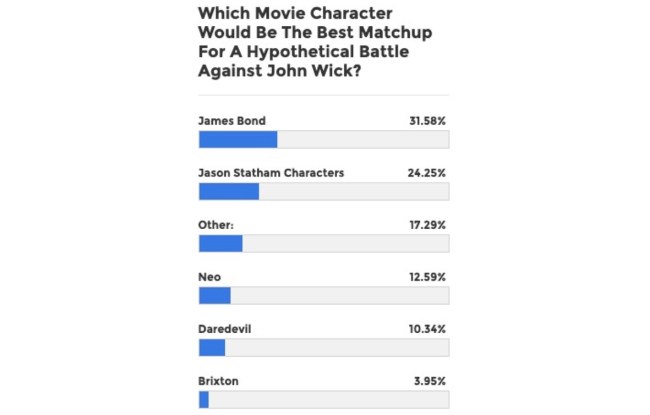 There are two key caveats here. The first is that we’re using Daniel Craig’s version of the character — not up for debate. The second, and more important distinction, is that both characters are wearing bulletproof protection. Considering that Wick’s bulletproof suit covers more surface area than a traditional kevlar vest, we’re suitin’ and bootin’ both Baba Yaga and 007 in said protective three-pieces, which is certainly something that Bond is used to fighting in.

So, now that the rules are clear and the fits have been tailored, let’s get to it: John Wick vs. James Bond. 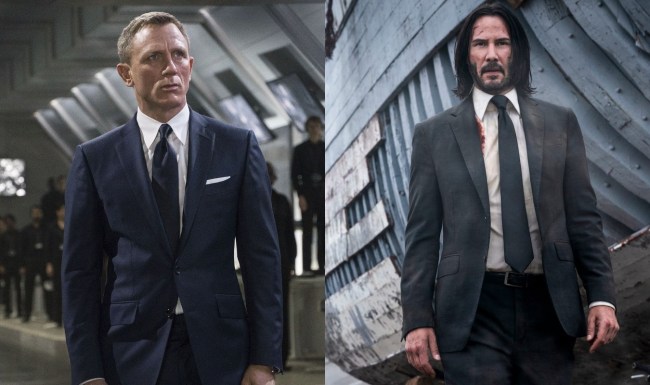 While Wick may have a slight reach advantage, Bond seems to have both a few years and a bit more muscle on him. When it comes to a battle to the death between two titans like this, I find the uptick in strength and youth to be a bigger advantage than whatever leg-up in reach Wick might have. Therefore, point goes to 007. 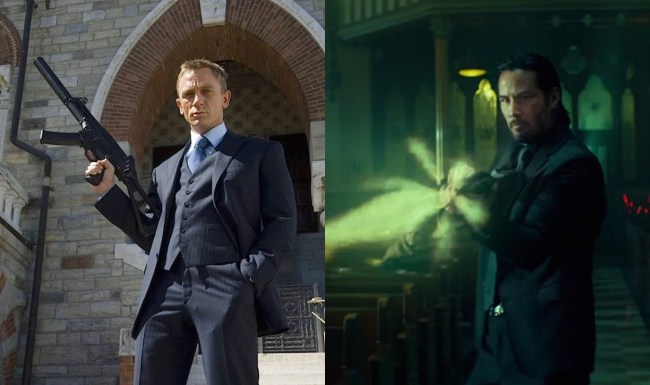 One of the few, but distinct, advantages that Bond has over Wick is his government backing. Think about it like this: when we first meet John Wick, he’s stowing his weapons under cement in his garage — Bond has an entire weapons department whose sole goal is to invent various guns and gadgets for him.

Wick had to beg for a ride to Europe. Bond trots the globe effortlessly. Wick is always wheeling and dealing, Bond is backed by a government agency filled with different branches that exist solely to help Bond accomplish his goal. Bond is a part of a larger team. Do you really think that it can be argued that John Wick has access to more resources than James Bond, who could likely call in a drone strike if he really wanted to?

This isn’t to say that Wick doesn’t have a proper arsenal at his disposal, as he has access to all sorts of guns, grenades, and knives thanks to his fellow underworld friends at The Continental. They both have equal micro resources, so therefore, we must zoom out and observe the situation from a macro level: if it was a game of escalation, who would be able to take it the furthest? My guess is Bond. 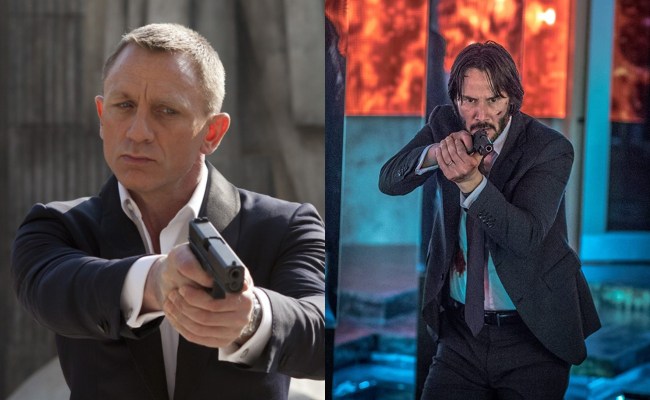 Here’s where the bout gets complicated. While we’ve already established that each character is equipped with a bulletproof vest, we’ve failed to determine which kind of — if any — gun they’re equipped with.

Not only is Wick a volume shooter, but he’s an accurate one. Despite the massive output of bullets he fires, he rarely misses. He’s the Steph Curry of gunplay, whether it be using massive automatic shotguns or an ankle-sized pistol.

Then again, Bond is so nice with a handgun that’s he’s essentially synonymous with the Walther PPK. We’ve also seen him wield weapons on the larger end of the spectrum as well, like at the end of Casino Royale:

Sometimes, though, you simply have to acknowledge greatness when you see it. Sure, the likes of Curry and Harden and Westbrook and Giannas have won league MVP in recent years, but everyone knew — and still knows — that LeBron James is the league’s best player. And that’s the case when it comes to John Wick and firearms ability: for as competent as Bond might be, Wick is better.

As Bane once told Batman, you merely adopted there dark, but I was born in it, molded by — and that applies to the ninja-like-abilities of these two. For as in-the-shadows as Wick may be, we cannot forget that James Bond is the spy. He is synonymous with the act of espionage and therefore needs to be given the respect he deserves. The NBA Finals MVP Award is named after Bill Russell for a reason (I don’t know what’s up with all of the basketball metaphor, they just fit).

But just because something came first doesn’t automatically make it the best. The Godfather Part II and The Dark Knight are better than their predecessors. Everything that Bond is capable of, Wick is equally capable of, if not more so. While 007 may have a license to kill, he’s not a mercenary — there’s still a set of rules he must follow. It’s why MI6 put a tracker in his arm. He’s always being watched.

Still, though, as he’s proven throughout the course of his films, particularly in Spectre, Bond is easily able to evade his watchful bosses if he really wants to.

Of all the categories, this one is probably the most even, so in the spirit of fairness, we’ll give both of them a point.

While Craig’s Bond movies may be less hand-to-hand combat-heavy than the outright beat-em-up style of the Wick franchise, there are certainly plenty of examples that highlight’s 007’s ability to take down trained opponents, whether it be multiple nameless henchmen or one “boss-level” type enemy — the two stalwarts of action movie villainy.

But are those skills enough to go toe-to-toe with the John Wick, whose entire aura and legend is built on the ability to mow through multiple waves of enemies (albeit with the help of his trusty bullets).

While Bond’s physical skills may be vastly underrated, even still, he’s unfortunately not in the same class as Baba Yaga. After all, we’re talking about a man who killed a guy with a fucking pencil and then followed that up by killing Boban with a god damn book. It would be a true battle to the death, but you have to given the advantage to Wick, as we’ve seen the character take down multiple opponents of all shapes, sizes and fighting styles.

A lot of you are likely — and blindly — rolling your eyes at the fact that Wick simply didn’t sweep through the categories and dominate Bond. But that’s not the point of these exercises — the key is to remove your emotion and look at the battle from a legitimately critical point of view. I know how much you love John Wick, I totally get it… but this is James fuckin’ Bond we’re talking about here! He can’t just be carelessly brushed aside.

But for all of Bond’s history and prestige and intelligence and resources, if it came down to a 1 v. 1 against John Wick in a life or death situation — unless he was able to kill Wick from a distance, which, as far as we’ve seen, is more or less impossible — he would lose. Bond may have the advantage in terms of physical strength and resources, but as we’ve seen in three movies now, none of that matters when trying to kill John Wick. The man has dispatched small armies by himself. Height and weight advantages are irrelevant when squaring up with Baba Yaga, he vanquishes all challengers. It seems the only way to kill him is by shooting him in the head at point-blank range.

Let me tell you, it would be hell of a fight. As we pointed out in measurables, Bond is stronger despite not being all that much shorter. While Wick adapts a sort of Terminator-like-blankness when he’s in battle, Bond’s brand of brawling is more anger-filled and emotional — Wick would not simply steam-roll him. This fight would go the distance and there would be moments where Bond would look like he has the upper hand. But that’s the thing about John Wick and that’s what makes the character so interesting: he’s regularly getting his ass kicked. If you watch any of the three movies, Keanu Reeves is really luggin’ Wick’s mid-50s ass around. You can tell he’s beat the hell up and exhausted to the bone. And yet, he always finds a way to win. His legend as the Boogeyman is earned but he’s virtually unkillable despite being as mortal as you and I. He is the epitome of a man on a mission, and if that mission happened to be to kill the world’s most famous spy, there’s no reason to believe he wouldn’t be able to pull it off.

PREVIOUSLY: Who Would Win In A Fight: Tyler Durden In ‘Fight Club’ Or Mickey In ‘Snatch’?

PREVIOUSLY: Who Would Win In A Fight: Christian Bale’s Batman Or Ben Affleck’s Batman?