Which Movie Character Would Be The Best Matchup In A Battle To The Death Against John Wick? 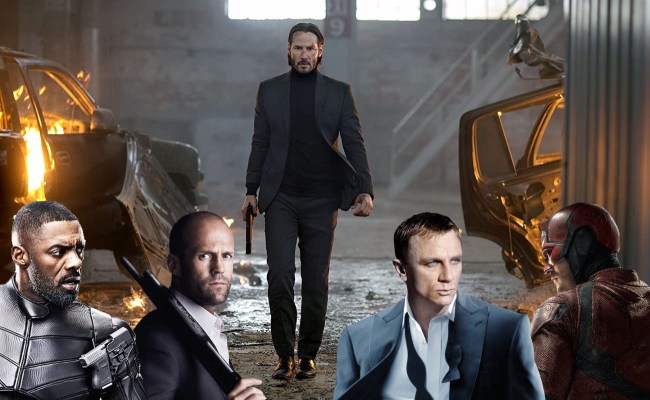 Over the last few weeks, I’ve been running hypotheticals on our social media accounts that pit somewhat equal and certainly iconic movie characters against each other in a battle to the death.  As a massive movie nerd, I particularly enjoy flexing that particular creative portion of my brain and actually attempting to analyze who would be victorious in these imaginary battles. 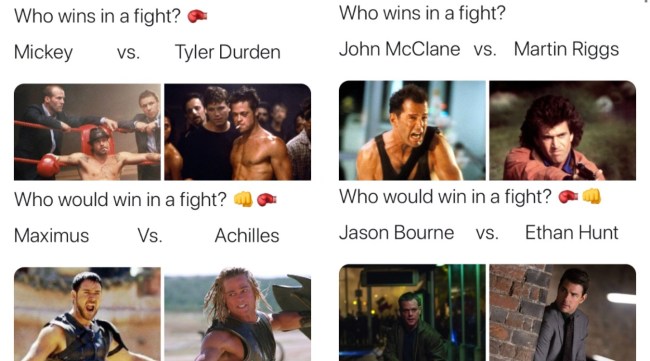 And every fucking time I run one of these, there’s at least a handful of jokers who respond with “John Wick”. Doesn’t matter if we’re talking about the demigod that is Achilles or the superhero that is Batman, people always seem to think, kiddingly or not, that John Wick would win.

Trust me, I get it — not only do I want to enter Baba Yaga into one of these battles, I want him to win: he’s one of the most badass movie characters created in the last 20 years. But the key here is that the characters must be relatively comparable: you can’t take the modern noir of John Wick and toss him up against the ancient brutality of Leonidas from 300. We need to find him the right matchup, and then — and only then — will we send him into the Action Hero Octagon.

So, if you’ve got any suggestions, please — I beg of you — hit me up on Twitter @eric_ital or via email at eric@brobible.com and let me know! Otherwise, here are the best candidates I’ve come up with so far. Now, to be clear, I’m not making the case for any of these guys to beat John Wick, I’m merely trying to figure out which character would present the most balanced matchup.

This matchup fascinates me the most, to be honest. In terms of combat style — minus the guns — Daredevil is perhaps the most similar to John Wick’s brand of ass-kicking. Similar to Batman (who’s not mentioned on this list because The Dark Knight would absolutely rinse John wick), though, Daredevil is a big anti-gun guy, which puts him at a huge disadvantage against the firearms expert that is Baba Yaga.

Butttt, if combat gets tight and Wick is disarmed, Daredevil is more than capable of handling his own. Not only that, but his lack of classic eyesight gives him what amounts to 360° vision, a clear supernatural advantage over Wick, whose biggest strength is his precision with pistols. If I was casting a vote, I’d put it towards the Man Without Fear.

Such is the undeniable legend of John Wick that a literally superhuman opponent is considered a relatively fair matchup. As Idris Elba’s Hobbs & Shaw character says himself, he’s the Black Superman.

The Transporter/Deckard Shaw (or anyone else Jason Statham has played)

This entry is essentially any character Jason Statham as played. Want to swap in Deckard Shaw from the Fast & Furious franchise? Have at it — you wouldn’t hear any complaints from me. In fact, that might ultimately prove to be the better matchup as Shaw would certainly be able to bring superior weapons and tech to the table.

Given Shaw’s proficiency with both guns and hand-to-hand combat, his general skill set best rivals that of Wick’s.

Neo is particularly tricky as he exists in a world entirely different from our own, so some guidelines would need to be put in place prior to the battle (like no flying, for example). But in terms of skillsets, the matchup is pretty on point: both excel at close-quarters hand-to-hand combat in addition to gun warfare. The only hurdle here is leveling the playing field to account for Neo’s superhero-like skills.

In my gut, I have a feeling Bond will ultimately be the choice that the audience goes with. After all — and no disrespect to Wick — but he’s essentially the Americanized, militarized version of James Bond. He wears a slick suit, bags bad bitches, and catches countless bodies in the cover of the night. He’s so mysterious he’s virtually invisible. He’s everyone and no one, everywhere and nowhere. Slap a bulletproof suit on 007 and we may have found our matchup.