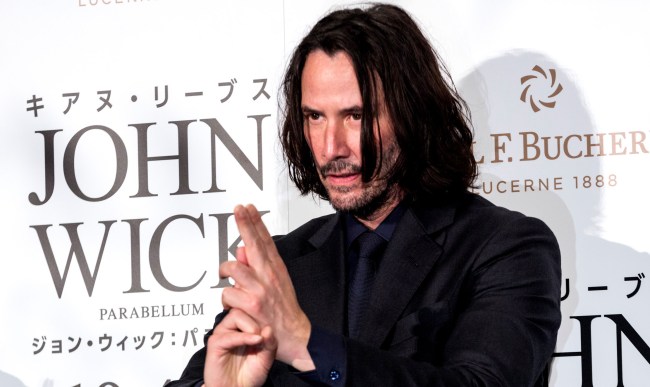 Because he is the nicest human being on the planet and you can’t tell me otherwise, Keanu Reeves is doing something special to raise money for children’s cancer charity Camp Rainbow Gold.

All of the money raised will go to support Camp Rainbow Gold’s “Shine for Camp” initiative with two dozen different items being up for auction.

The biggest prize, of course, is the 15 minute Zoom call with the John Wick star, who is a supporter of the Idaho-based children’s cancer-fighting non-profit.

Bill & Ted. Speed. The Matrix. John Wick. You know him. You love him. This is truly priceless and now you have the chance to Zoom with him from home! Get your questions ready and spend 15-minutes with actor, director, producer and musician, Keanu Reeves.

The auction lists a market value for the call of $10,000, but we all know that a face-to-face, even on Zoom, with Keanu Reeves is actually priceless.

So far, with bidding coming to an end on June 22 at 12:00 MDT, the top current bid sits at $9,800, by someone who obviously really wants to talk to Keanu based on the fact that every time someone else bids their auto-bid automatically kicks them back up to the top of the chart.

Reeves has long been known for his charitable work with children and cancer research through his own foundation even though he tries to keep it on the down low.

“I have a private foundation that’s been running for five or six years, and it helps aid a couple of children’s hospitals and cancer research,” Reeves told Ladies Home Journal in an article published in 2009. “I don’t like to attach my name to it, I just let the foundation do what it does.”

According to the rules of the auction, the Zoom call must take place the week of July 6th at a time to be agreed upon by both the auction winner and Reeves. Oh, and if there is any “threatening or inappropriate behavior” by the winner the whole thing is cancelled as if someone would do such a thing. It’s Keanu Reeves! If someone behaved like that, they’d have to leave the country.