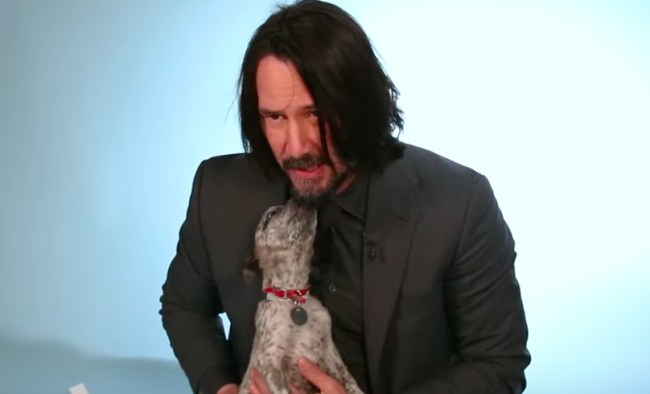 Keanu Reeves, The Rock, Hugh Jackman, Denzel Washington. The Mount Rushmore of Actors Who Are Un-Hateable. If you hate any of these people, it says more about you than them.

I’d be more of a red flag if my girlfriend told me she hated puppies than it would be telling me she can’t stomach Keanu Reeves. There is no one on the planet hotter right now than whose name literally translates to “cool breeze over the mountains” in Hawaiian.

Keanu provided a chunk of the profits from The Matrix sequels to the crew, and when asked about it, he became so bashful to the point of being annoyed–“I’d rather people didn’t know that. It was a private transaction. It was something I could afford to do, a worthwhile thing to do,” he said. We’re talking about the dude helped passengers with flight arrangements after his plane had to make an emergency landing. The guy who nearly brought America to its knees with his take on what happens when we die. He’s even being praised by feminists for the considerate way he interacts with female fans.

People love to talk about Keanu Reeves but very little about his work with the inner city youth of Chicago and how he fixed a struggling baseball team and provided young Black boys with an outlet to get out their frustrations with the day-to-day struggles of living in the hood.

The public has taken notice, and many have started petitions to lobby TIME to name the 54-year-old actor the coveted Person of the Year in 2019.

Jackson Breem created a Change.org petition titled “Make Keanu Reeves 2019 Times Person of the Year.” Within hours, the petition has garnered thousands of signatures and at the time of this writing, it has amassed nearly 35,000.

Hundreds of people who signed the petition detailed their reasons for doing so, and it’s very clear Keanu would be elected President in 2020 if he willed it.

If you feel sad, remember that the world is 4.5 billion years old and you just happen to exist at the same time as #KeanuReeves pic.twitter.com/bKEn3YTBo7