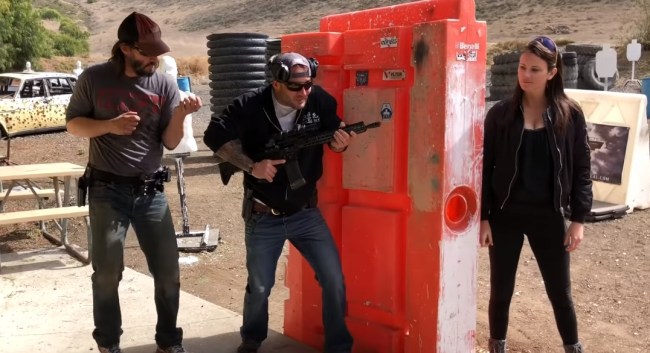 The most impressive aspect of the John Wick movie franchise is those jaw-droppingly flawless gun battles. The marvelously orchestrated gun ballet doesn’t just happen. Keanu Reeves puts in a ton of work and many hours understanding and executing those brilliant shootout scenes.

Videos of Reeves being trained in shootout tactics and strategies have been released and they are so very interesting to watch. Shawn Ryan is a former Navy SEAL and CIA contractor who started his own company to teach people a variety of tactical training. His company, Vigilance Elite, normally gives instruction on how normal people can protect themselves. In these videos, Ryan is holding class so that Keanu Reeves can portray a lethal assassin while also looking legitimate doing so.

RELATED: First Trailer For ‘John Wick 3’ Is Violently Delicious As Keanu Reeves Tries To Kill Boban Marjanovic With A Book

The gun training videos give us a glimpse as to what John Wick Chapter 3: Parabellum might look like, at least when it comes to those incredibly choreographed gunfights. This behind-the-scenes footage shows just how dedicated Reeves is into making John Wick into an accurate and believable shooter.

RELATED: New Photo For ‘John Wick 3’ Has 2 Dogs And The Internet Vows To Protect These Good Boys At All Costs

Here is a 2016 video of Keanu training with real guns in a three-gun-drill shows how his schooling equated to those incredible gunfight scenes.

RELATED: AWESOME ‘John Wick’ Nerf Parody Is Your Video Of The Day

Other behind-the-scenes videos have shown Reeves preparing to be the killing machine that is John Wick.

RELATED: Keanu Reeves’ Motorcycle Company Has Released The Method 143 Concept That Will Blow You Away