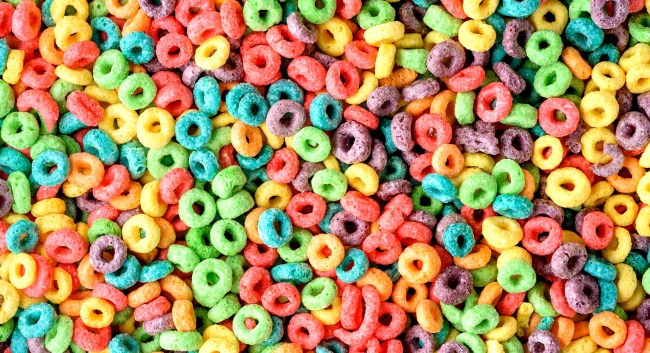 For some reason, Kellogg’s decided that now would be the perfect time to completely redesign their iconic mascot for their Froot Loops cereal, Toucan Sam, and people are NOT having it.

Granted, there are far worse things for cereal lovers to be worrying about these days than Toucan Sam getting a new look. Like the fact that there are actually people out there who prefer putting water on their cereal instead of milk, but this change definitely struck a nerve.

Toucan Sam has been featured on boxes of Froot Loops since way back in 1963, and yes, he has seen a few cosmetic tweaks over the decades, so this isn’t the first time he’s gone under the, uh, pen.

Sam’s nose originally had two pink stripes until his beak was changed to reflect the three colors appearing in Froot Loops – red, orange, and yellow.

Now, however, with Kellogg’s going nuts with a whopping eight different colors showing up in Froot Loops, Toucan hasn’t been able to keep up. (They all still have the exact same flavor: wax.)

Related: Ranking The Top 5 Cereals of All Time

Yeah, it’s not going well, at all, for Kellogg’s following this very controversial move.

I initially mistook the new Toucan Sam as a screenshot from some Gumball parody episode I assumed I had missed. pic.twitter.com/C0w3rcrw3C

Someone at Kellogg's thought it was a good idea to not have Toucan Sam's redesign contain a beak mouth. pic.twitter.com/YjFAVkuuHJ

My exact reaction when I saw Toucan Sam’s redesign 😭 pic.twitter.com/CW6HyKWDty

Can I ask what the hell happened to toucan Sam? pic.twitter.com/9dG8VDNxXB

what is this thing and what did it do to toucan sam pic.twitter.com/4u3Z5VQBRu

Once again, as is always the case with company and/or sports team redesigns, fans did it better.

Tried my hand and re-designing that new Toucan Sam. Got rid of the awful human teeth, the solid black line-art, noodle wings, paws, and the over saturated colors. While still trying to stick with the modern chibi cartoon design.#art #ToucanSam pic.twitter.com/N8iOhKqTxN

Okay, this is how I would redesign Toucan Sam based on this and his past iterations. One, don't use gradients, they look tacky and distracting. Two, I took from this design and his 1960s design giving a more defined shape that doesn't have the weird mouth pasted on. https://t.co/22getfVqS5 pic.twitter.com/GdPzlQMic0

tried my own hand at a new toucan sam design…..
my main focus was improving the shape language and colors. i wanted something that looks friendly for both rigged and frame by frame animation.#illustration #characterart #mascot pic.twitter.com/UAczj6PJuO

My take on the new Toucan Sam design, the mouth really bothered me so i wanted to try and “fix” it 😂😂😂

wanted to take a stab at that new toucan sam look pic.twitter.com/Cikd1CG1Xf

My own Toucan Sam. #fruitloops pic.twitter.com/uHXIBlYk74

Tried my hand and re-designing that new Toucan Sam. Got rid of the awful human teeth, the solid black line-art, noodle wings, paws, and the over saturated colors. While still trying to stick with the modern chibi cartoon design.#art #ToucanSam pic.twitter.com/N8iOhKqTxN

Due to all the backlash Kellogg's received upon revealing their new design for 'Toucan Sam', they reached out to me to Redesign their redesign. very proud to work on such an iconic character🌈🥣 pic.twitter.com/TmprJW9qDZ

Okay, maybe not that last one.

Even kids know what’s up.

Perhaps Kellogg’s should have just gone back to the OG design, huh?

i think we should just bring this toucan sam design back pic.twitter.com/SfcrSgZsqd