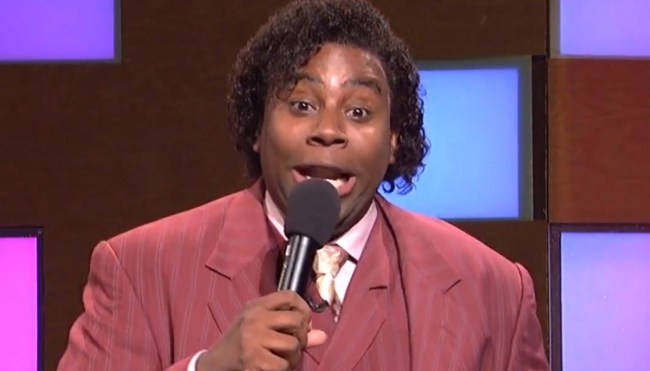 There aren’t many people who’ve managed to master the art of sketch comedy quite like Kenan Thompson, who was 15 years old when he join the original cast of All That on Nickelodeon in 1994 and has spent close to two decades roaming the halls of 30 Rock since joining Saturday Night Live in 2003.

During his time on SNL, the comedian has watched plenty of notable names make their way through the revolving door of talent that’s come and gone through Studio 8H. However, Thompson—whose tenure is largely defined by his roles as the host of fictional shows like What’s Up With That? and Black Jeopardy (as well as his impression of Steve Harvey on Family Feud)—seems to be perfectly content staying right where he is.

People have a tendency to look at SNL through rose-colored glasses and forget the many duds that are overshadowed by the classic sketches that are frequently cited to support the argument that the show “isn’t funny anymore” (nothing highlights that reality quite like this article concerning an Entertainment Weekly critic who repeatedly asserted that was the case in 2010— a year where Thompson shared the stage with Bill Hader, Jason Sudeikis, Will Forte, Andy Samberg, and Kristen Wiig).

With that said, as a longtime fan of the show, I do think there’s been a noticeable decline in recent years thanks to a number of cringeworthy and fairly unprecedented creative decisions. I also don’t think it’s a stretch to be concerned it could get even worse following the departure of Pete Davidson, Kate McKinnon, Aidy Bryant, and Kyle Mooney at the end of its 47th season.

Last year, Lorne Michaels hinted he was pondering the idea of retiring following the conclusion of SNL‘s 50th season in 2024, which would be a potentially devastating blow for a program he’s famously micromanaged since assembling the original cast for its inaugural season all the way back in 1976.

It’s hard to imagine NBC would use that departure as the sole excuse to bring one of its most iconic programs to a permanent end. However, it’s certainly not out of the realm of possibility—and Thompson seemed to think it could happen based on what he had to say about the topic during an appearance on Hell of a Week with Charlamagne Tha God.

Here’s what he had to say about the matter via Yahoo:

“There could be a lot of validity to that rumor, because 50 is a good number to stop at. That’s an incredible package. He will be, probably, close to 80 years old at that point, and you know, he’s the one who’s had his touch on the whole thing.

“So, if somebody tries to come into his shoes, you know it’s a good opportunity for NBC to save money as well, you know what I’m saying? So they might slash the budget and then at that point, you can’t really do the same kind of show.

So that’s unfair to watch it just really go down kind of in flames for real because of those restrictions…. so capping it a 50 might not be a bad idea.”