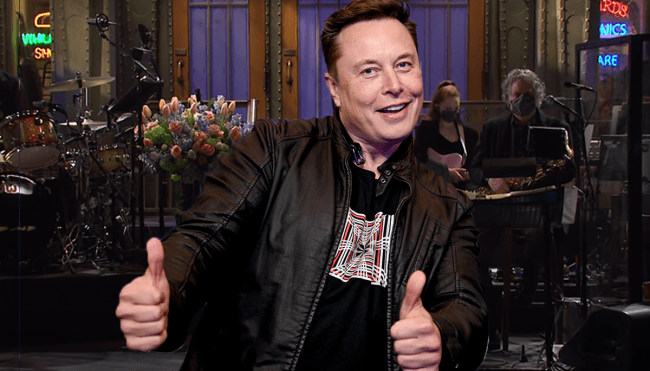 I wouldn’t be shocked if someone uttered those words after the second episode of Saturday Night Live aired on NBC in 1975, as this age-old complaint has been parrotted countless times over the decades to bemoan the alleged decline of a show that’s still going strong in the midst of its 46th season—one that will feature Elon Musk taking the stage inside Studio 8H when he hosts on May 8th.

There were plenty of people who were less than thrilled with that development when the news broke over the weekend, as basically everyone who came across the announcement had the same question: Why? I was equally baffled by the decision to tap the entrepreneur for a role traditionally reserved for celebrities with things to plug, but I was surprised at just how mad people who presumably care about the show were, as this development shouldn’t have really come as much of a shock if you’ve been paying any attention to the direction SNL has been going in over the past few years.

There’s a reason Saturday Night Live is viewed as a comedy institution. The fact that Lorne Michaels successfully convinced a major network to greenlight a sketch show starring a ragtag group of comedians plucked from relative obscurity was a miracle in its own right, and their ability to bring its brand of often risque and absurdist humor into the mainstream was nothing short of revolutionary.

SNL would eventually establish itself as the ultimate comedic proving ground, and in addition to being a factory for some of the funniest people the world has ever seen, it’s also given plenty of aspiring entertainers a formative education in weekly installments that they’ve been able to harness while carving out their own space in the industry.

As someone whose brand of humor was indelibly shaped by Saturday Night Live, I understand why so many of its fans have a fairly complicated relationship with it. I get why the “SNL Isn’t Funny Anymore” line gets trotted out time and time again, but it’s also a textbook case of the Nostalgia Effect. It’s easy to judge new material based on how it measures up to classic sketches from the Adam Sandler, Will Ferrell, and incredibly formidable Jason Sudeikis-Will-Forte-Bill Hader eras, but it’s easy to forget you’re putting current bits up against older ones that stood the test of time as opposed to the thousands that have been all but forgotten for a reason.

I can’t say I’m mad that Elon Musk is hosting, which is mostly because I can’t imagine how anyone can currently care enough about SNL to be genuinely angry about the decision. However, it appears there are plenty of people who do, but if you have that much of an emotional stake, I feel like you should already be well aware the move is just the latest in a long line that highlights the existential crisis the seems to be facing: the world no longer needs Saturday Night Live as much as Saturday Night Live needs the world to pay attention to it.

Way too many think pieces containing far too many words have been written concerning the fateful Saturday night of November 7, 2015, which is when aspiring presidential candidate Donald Trump stepped into the role of SNL host. Politics aside, the shameless ratings ploy would’ve been somewhat justifiable if the episode itself had actually been funny, but the fact that a parody of Drake’s “Hotline Bling” video featuring Trump dancing was the highlight of the night tells you everything you need to know.

However, that has nothing on the truly painful cold open SNL opted to go with in the wake of Trump’s election featuring Kate McKinnon dressed as Hillary Clinton singing Leonard Cohen’s  “Hallelujah,” which remains one of the most perplexing creative decisions ever made.

Following the Trump debacle, it seemed like SNL had decided to stick to its traditional hosting formula until that changed with the recent Musk reveal. However, that didn’t stop it from repeatedly veering away from other custom conventions in a fairly blatant attempt to lure in viewers—primarily in the form of stunt casting.

The most notable example of this was the decision to make Alec Baldwin SNL‘s Official Donald Trump Impersonator. In the past, a member of the cast was normally tasked with presidential duties, but Baldwin’s initial appearances generated enough hype that he played the role for four years (even though I’d argue he wasn’t even that good.) When the presidential election once again reared its ugly head last year, Saturday Night Live continued to stumble down that slippery slope with Jim Carrey’s uninspired take on Joe Biden and SNL alum Maya Rudolph’s fairly unremarkable Kamala Harris.

The choice to have Musk host can’t be viewed as anything else but SNL attempting to stay relevant in an era when comedians who once needed a platform like NBC to make a name for themselves can simply use the internet and those who relied on television for entertainment can do the same. Thanks to the reputation SNL seems intent on tarnishing, there are still plenty of fans who will turn in on Saturday nights regardless of who’s hosting, but it still has to figure out a way to compete for eyes that are otherwise glued to a phone or computer screen—which is why opting for Elon Musk is so ironic.

Musk is a 49-year-old man with the same sense of humor as a middle schooler who thinks the definition of” being funny” is the ability to recite Monty Python quotes, reference memes, and say “69” a lot even though they don’t actually know what the number refers to. He is the embodiment of internet culture, and the fact that Saturday Night Live has invited him to take the trip to 30 Rock is the most glaring sign of the creative direction it’s heading in that we’ve been treated to so far.