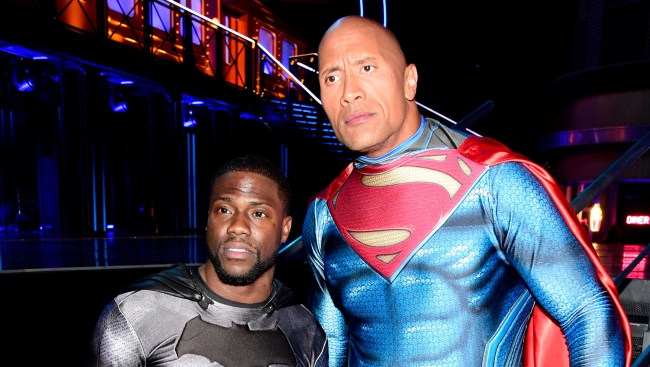 Things have been pretty quiet in 2019 when it comes to the greatest fake beef in Hollywood history: Kevin Hart vs. Dwayne “The Rock” Johnson.

The last time we saw one of these two take a shot at the other was back in December when Johnson wrote about how he is bionic from the waist down and shared a look at his cheat day, sideswiping his buddy Hart in the process.

Hart, who will be working with Johnson at least one more time in the near future on the third Jumanji film, hasn’t forgotten about all the digs his pal DJ has taken at him, so when he was asked if he has a nickname around the gym like “The Rock” does, Hart let it be known that he’s actually known as “The Rock” around the gym and claims Johnson stole the nickname from him.

“It is already,” Hart told the TMZ camerman. “Yeah, I’ve been The Rock, you guys just didn’t know that. He stole my name.”

In related news, Hart also recently showed off his tremendous basketball skills, crushing his daughter on a totally regulation-height rim.

Dwayne must be so proud.