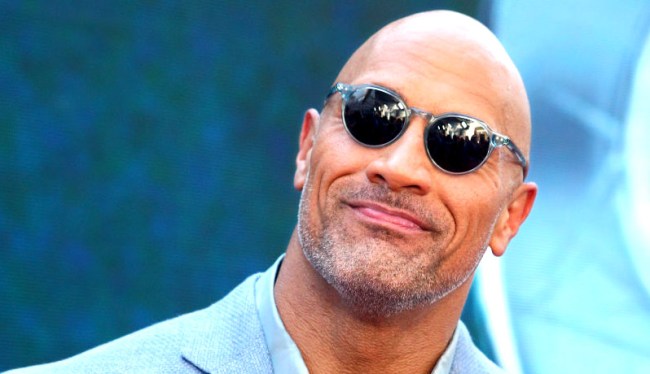 In yet another show of superhuman strength, Dwayne “The Rock” Johnson shared a video of himself knocking out some personal best, 460-pound hip thrusts.

As we have mentioned in the past, The Rock brings 40,000 pounds of workout equipment with him to every movie set so he can clang and bang while chasing bad guys or jumping from skyscrapers on one leg, causing trillions of dollars in fictional damage.

So, seeing as how DJ is currently filming the latest addition to the never-ending Fast & Furious film franchise, Hobbs & Shaw, he, of course, brought his “Iron Paradise” with him.

Writing on Instagram about his latest feat of strength, The Rock said, “Personal best 460lbs hip/glute thrusts to warm up before hitting legs. Solid gains in strength and coach @daverienzi and I are always managing lower body past injuries – multiple knee surgeries, quad & adductor tears off pelvis, ruptured surgically repaired Achilles, multiple hernia surgical repairs etc etc. Stronger now and carrying more dense muscle then ever before, but the key is really smart, precise, intense training and diet. And doing my best to always listen to my body.

“And according to NASA, I’m basically bionic from the waist down. Which always leads to inappropriate jokes whilst I drink my tequila. We trained very hard today.”

Johnson also posted another Instagram photo showing his “cheat day” of jumbo cookies, while taking yet another hilarious swipe at his BFF Kevin Hart.

“The #CheatMealCookieTrain rolls on with my DJ signature milk chocolate chip, salted caramel chip jumbo cookies with a shit load of peanut butter and guilt in the middle,” wrote The Rock.” Enjoyin’ my cookie gluttony watching a @netflix special I HIGHLY RECOMMEND if you like love your comedy raw, like I do – “Bumping Mics” with two of my fav comedians @therealjeffreyross & @daveattell. I did a show with Jeffery a few years ago for our military at Pearl Harbor, called #RockTheTroops. This sumbitch called me Harambe and 50,000 troops roared with laughter and I thought I re-tore my surgically repaired hernias cause I was laughing so fucking hard. Jeffery and Dave have GREAT CHEMISTRY together… reminds me of me and my incestuous biscuit shit of a son @kevinhart4real.”

Hobbs & Shaw is scheduled to be released on August 2, 2019 and also stars Jason Statham as Deckard Shaw, Vanessa Kirby as Hattie Shaw, Idris Elba as Brixton, as well as Eddie Marsan and Eiza Gonzalez.