The Rock Won Election Day With Yet Another Epic Trolling Of Kevin Hart: ‘Do It For Our Little Ones’ 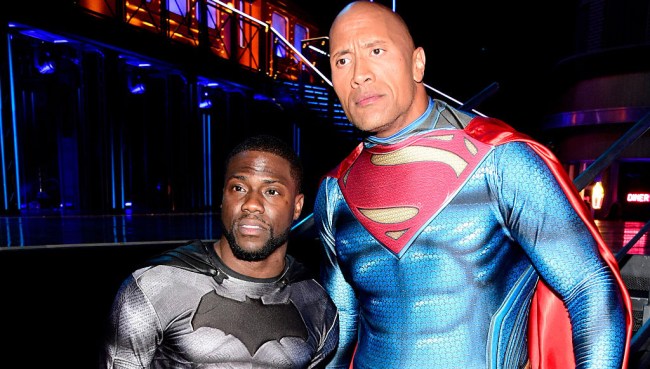 As the votes are being tallied and the results start rolling in there really is only one true winner on this Election Day 2018 and that winner would be our 46th President of the United States Dwayne “The Rock” Johnson.

As anyone with a social media account is VERY well aware, celebrities all over the country are asking the citizens of this great country to get out and vote, but no one did it better than the most electrifying man in all of entertainment.

In a continuation of Kevin Hart and The Rock’s non-stop busting of one another’s chops, the latest salvo was launched by Johnson on social media as he pleaded with everyone following him, “Get out and VOTE. Don’t do it for me. Do it for our little ones.”

A nice, solid message from a man who will one day be running this country.

The accompanying photo, however… that’s where he wins the day.

Uh oh, Kevin is NOT going to like that.

Especially since this follows another social media post by The Rock just three days prior in which he “mistakenly” called Hart his son.

“Taking care of business, The Rock wrote on Instagram. “Great having my son, I mean one of my best friends @kevinhart4real stop by my set of HOBBS & SHAW (our FAST & FURIOUS spin-off film) to have a big meet up about new opportunities. We f**k with each other all the time because it’s what we love to do and the world loves it too, but we also have a mutual hunger to build out our enterprises and create opportunities that entertain the world. We’re lining up some very big things for the world to enjoy. I still want to slap his little lips into next week though.”

Savage. And I love it.

Yes! Vote! I did this one not too long ago pic.twitter.com/SLB2IJ5Gmt

This is @KevinHart4real right now pic.twitter.com/q2s94aNsVg