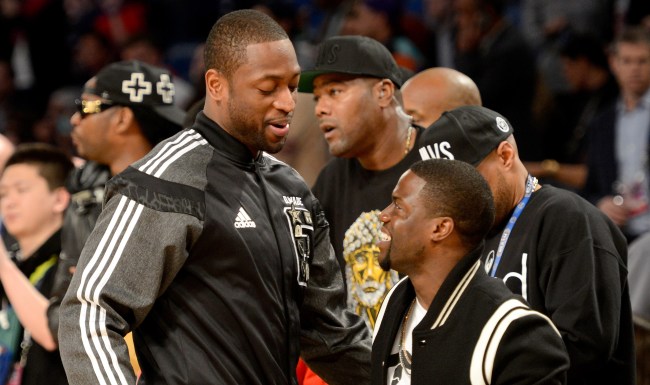 It’s a very good thing that Kevin Hart has a great sense of humor because the short jokes he has to deal with from his famous friends are almost non-stop.

Three days ago, Dwayne “The Rock” Johnson continued his social media savagery of his BFF Hart with another in a long line of jokes about Hart’s diminutive size.

“My lil’ Jasmine Lia just looooves coming to hang out with me in the #IronParadise while I clang and bang and crank out loud tunes,” DJ wrote on Instagram. “It warms my cold black heart as she just sits on the ground and looks up in complete loving awe and says “Wow daddy you’re so strong” while I hammer away. Ironically, my baby son @kevinhart4real does the exact same thing too when he comes to watch me workout. #GratefulForTheseLittleMoments #TeachingAllMyBabyGirls. #AndLittleKevKevToo. #BeTheHardestWorkerInTheRoom.”

Then, on Sunday, Hart hung out with another one of his besties, the guy who he inspired to dismantle his beloved 76ers in the playoffs last year, Dwyane Wade.

Look what you did, @KevinHart4real. pic.twitter.com/cIPwIruXyG

As a show of support for Hart performing in Wade’s city of Miami, he presented him with a couple of jerseys. One was in honor of his comedy album and tour.

And the other… well, it was “for Kevin’s son.” At least that’s the story Hart tried to pass off.

Watch as Hart walks a very fine line between being salty AF and playing along with the joke when a woman off camera jokes about the jersey being for his son, saying, “Are you sure?”

Methinks Kevin Hart might be getting tired of the short jokes.