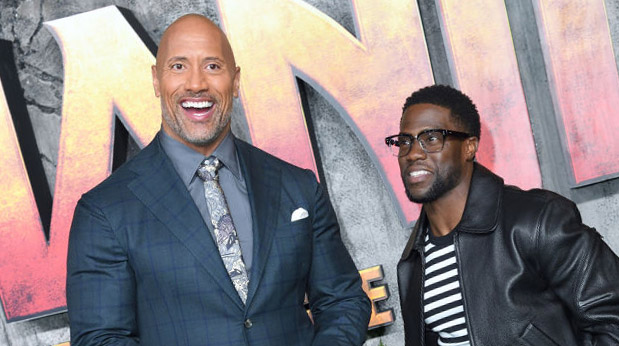 Kevin Hart and Dwayne “The Rock” Johnson have just about the most fun relationship of any pair of celebrities on the planet. Ever since they began filming Central Intelligence together, and especially during and after they shot Jumanji: Welcome to the Jungle this odd couple has been verbally sparring like they’ve been best friends their whole lives.

Their “arguments” are just absolutely brutal. Especially that time they were shooting Jumanji and Hart called The Rock a diva.

And now, in the funniest thing Kevin Hart has done since he drunkenly tried to get on the Eagles’ victory stage after Super Bowl LII, Hart started up another beef with his bud by mocking an action figure of The Rock, while praising just how cool he thinks his looks.

“This might be the funniest/best gift ever 😂😂😂😂 major thank you to my @mountaindew family for surprising me with this…and also thank you for making me look so much better than @therock ….He looks so stupid!!!” Hart wrote on Instagram. “Look how dumb his mouth looks 😂😂😂😂 He looks like a dickhead….and look at me standing over there looking all cool & stuff. Man…I look incredible…I look so bad ass!!!! Goooooo Meeeeeee #KickStart #MountainDew #TheRockLooksSoStupid.”

Kevin Hart might be the only man in the world who can use a hashtag like #TheRockLooksSoStupid and get away with it. Well, sort of get away with it. Because, of course, DJ couldn’t take those insults lying down and had to respond, as only he can.

In a comment on Hart’s post, Johnson wrote, “This is the dumbest shit I’ve ever seen. You look like your receiving a Mountain Dew enema up your ass – with a confused look on your face because you actually like the feeling. How bout you go Kick Start this 🖕🏾”

Then, because that wasn’t enough, The Rock then made his own post on Instagram to drop another virtual People’s Elbow on his bro.

Do these two have another movie coming out together? Because I’ll definitely pay more money to go see it. (Except for another Jumanji. I’m with this guy on that. Sorry, Rock, don’t kill me.)