Kevin From ‘The Office’, Brian Baumgartner, Hit Up A University Of Iowa Bar, Left A Very Nice $69 Tip 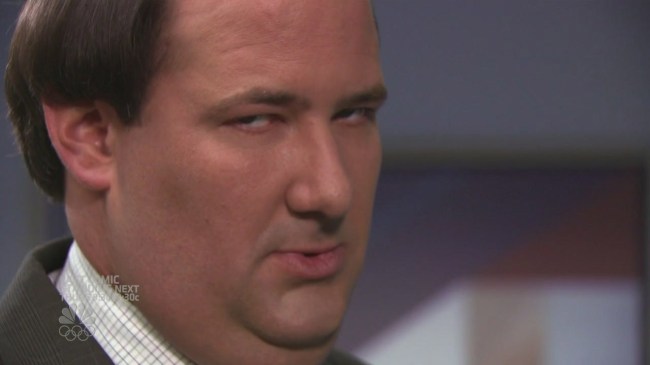 Brian Baumgartner, who played Kevin Malone on The Office, is either the first or second most famous person to enjoy himself a good “69” joke – recently retired Patriots tight end Rob Gronkowski being the other.

Something that we were reminded of when Baumgartner visited Iowa City with Leslie David Baker, aka Stanley, for a speaking engagement at the University of Iowa, where it appears he has more than a few fans.

Following the event, Baumgartner decided to hit up Bo-James bar in downtown IC, blowing the minds of everyone in attendance and hanging out with them until around one in the morning.

According to the Des Moines Register…

Surrounded by an excited crowd of people at Bo-James bar, Baumgartner belted out country classics like John Denver’s “Take Me Home, Country Roads” during the bar’s weekly country night. Poking fun at his age relative to most of the crowd, he also led a rendition of Fun’s “We Are Young.”

“People were swarming him and asking him the strangest questions, but he was super nice,” said Tiffany Cohen-Kniffen, whose family owns the bar.

At one point, a man bet Baumgartner $50 on a game of darts, which the former ‘Office’ star then lost. After the game, the man wanted a picture with Baumgartner, who jokingly said he would agree to for the price of $50.

“I have been bought many drinks in my life from strangers – but this is a first. #chili,” Baumgartner wrote.

Seriously @BojamesBar — Kevin stops by and you didn't call me?!? https://t.co/aISOEHCiti

TMZ reports that Baumgartner “was downing Crown and Cokes, and he even climbed behind the bar.”

My brother met Kevin from the Office (Brian Baumgartner) yesterday and I swear I’ve never been more salty.

GUYS TODAY IS THE BEST DAY OF MY LIFE I MET BRIAN BAUMGARTNER aka KEVIN MALONE OMFGGGGG pic.twitter.com/UrDGAdB62u