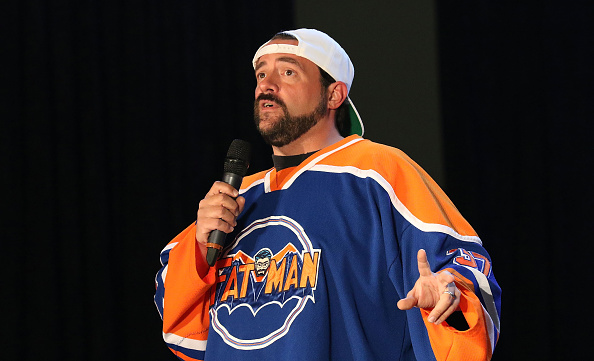 Six months and two days ago, Kevin Smith suffered a massive “widow-maker” heart attack from a 100 percent blockage of his left anterior descendiny artery. The lovable director survived the scary health scare and was given a second chance on life. Smith, to his credit, has run with the opportunity by completely changing his lifestyle and lost over 50 pounds!

The 48-year-old Clerks director celebrated a major weight loss accomplishment this week when he announced that he lost 51 pounds. Smith posted an incredible body transformation photo on his Instagram on Sunday.

RELATED: Kevin Smith Tells The Story Of How Seth Rogen Turned Him On To Weed

Smith started losing weight when he switched to a plant-based, vegan diet from entertainer Penn Jillette’s book “Presto!: How I Made Over 100 Pounds Disappear and Other Magical Tales.” In less than two weeks after his heart attack, Smith lost 20 pounds.

Recently, Smith has been using Weight Watchers, which may have something to do that he is a new company ambassador. In six months, Smith has gone from 256 pounds to 205 pounds, a weight that he hasn’t been since high school. Smith’s doctor recommended that he lose 50 pounds, but Smith isn’t done with the weight loss. Smith’s goal is 195 pounds.

After the first show this evening, I had a massive heart attack. The Doctor who saved my life told me I had 100% blockage of my LAD artery (aka “the Widow-Maker”). If I hadn’t canceled show 2 to go to the hospital, I would’ve died tonight. But for now, I’m still above ground! pic.twitter.com/M5gSnW9E5h

Here are some more photos that show the astounding weight loss by Smith.