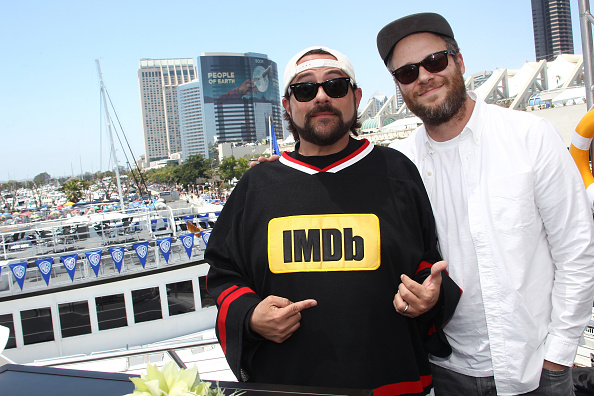 If you watched any of Kevin Smith‘s delightful movies you would assume that he is is a pothead. There is no shortage of references to weed, shit, there’s even the superhero duo named “Bluntman and Chronic.” Smith directed Afroman’s stoner anthem “Because I Got High,” and Kevin’s alter-ego Silent Bob appeared in the video where he smokes a gargantuan blunt with the rapper and Jason Mewes. However, Kevin admits that he never really smoked weed despite having the typical stoner burnout from New Jersey look down pat. Recently, Smith had an awakening to marijuana and it is all thanks to Seth Rogen. No surprise there.

Smith started smoking regularly at the age of 38-years-old and says kids shouldn’t toke up or should anyone who will use the drug as an excuse to be unproductive. Now, Smith admits he is a “massive stoner” who wakes and bakes and even goes to bed stoned, but he has one rule for smoking weed — when he tokes up he must be doing something productive or creative such as writing or doing a podcast. Smith has credited his recent productivity on weed because he wants marijuana, but to enjoy it he must be productive.

His doctor even credited marijuana for saving his life when he suffered a massive heart attack last February. Kevin Smith definitely has a positive outlook on marijuana and the benefits towards being creative, but recognizes that there are pitfalls as well.