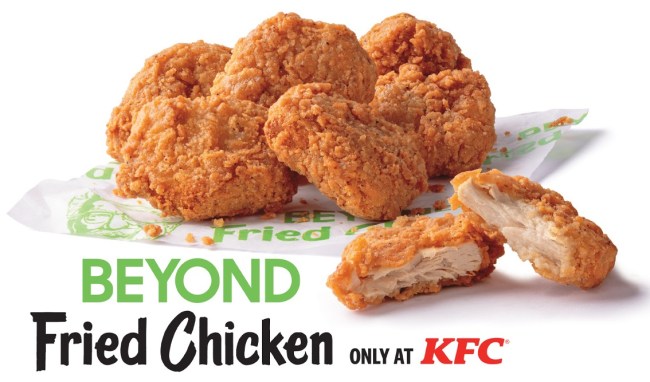 You can call me crazy, but I believe if you’re going to call something ‘Fried Chicken’ then there should at least be some actual chicken in it. I’ve tried the various plant-based protein meat replacements from Whole Foods. The burgers are fine. I actually quite enjoy the sausages because the casing has a snap that makes them seem pretty realistic. But KFC rolling out Beyond Fried Chicken is just a hill I’m not willing to climb.

In a Thursday press release, KFC announced they’d be bringing Beyond Fried Chicken to 50 KFC locations throughout Southern California across San Diego, Orange County, and Los Angeles. I’m sure this will be an extremely popular item. My wife walked past my computer as I was reading the press release and got all excited about it (she’s a pescatarian). But this just isn’t for me.

This isn’t the first time KFC has debuted Beyond Fried Chicken but it is the first time this plant-based protein (not chicken) has made it to the West Coast. KFC seems quite excited about bringing this product out West beginning July 20th:

Beyond Fried Chicken debuted in August of 2019, making KFC the first national QSR to introduce plant-based fried chicken in the U.S. in partnership with Beyond Meat. The menu item was first available in a one-day consumer test in Atlanta and sold out in less than five hours. Following additional product development, KFC launched an expanded market test of Beyond Fried Chicken in February in the Nashville and Charlotte markets, which received an overwhelmingly positive consumer response.

“I’ve said it before: despite many imitations, the flavor of Kentucky Fried Chicken is one that has never been replicated, until Beyond Fried Chicken,” said Andrea Zahumensky, chief marketing officer, KFC U.S. “We know the east coast loved it, so we thought we’d give those on the west coast a chance to tell us what they think in an exclusive sneak peek.

I’ll admit that it looks tasty. The picture they’re using, I see why that would entice a lot of people.

Beyond Chicken will be sold in a 6 or 12-piece option with a choice of dipping sauce and the option of making it a combo with a medium drink and a side. The prices will start at $6.99. They have a restaurant locator/beyond indicator on KFC.com for anyone looking to track down the Beyond Fried Chicken.

My colleague Connor went to Hooters after they rolled out their artificial chicken. You can read all about his experience with that right here.

If I’m eating fried chicken I want it to be actual chicken and I really don’t think that’s a wild demand. Off the top of my head, the best-fried chicken I can think of is Cahill’s Market in Bluffton, South Carolina. They raise all the chickens on the property and every bite is pure deliciousness.