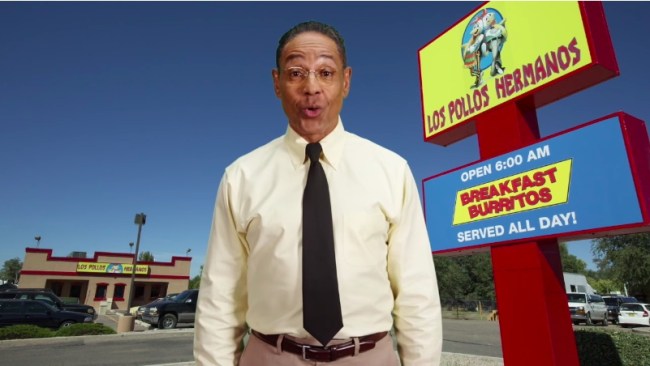 Breaking Bad is one of those shows that, for as good as it is, is based on a pretty absurd premise. In what world would a high school chemistry teacher get diagnosed with cancer and decide the best way to support his family is to start cooking meth?

Thankfully, Breaking Bad was able to turn a seemingly shaking foundation into one of the most impressive television achievements of the past decade.

The show had a massive cultural impact, and we learned that it might have not been that unrealistic after all when you consider the case of an actual chemistry teacher in New Mexico who got busted for running a meth ring.

However, he wasn’t the only criminal inspired by the show, as there was another guy who was arrested a few years ago on drug charges while he was wearing a t-shirt emblazoned with the logo of Los Pollos Hermanos— the fried chicken restaurant that Gus Fring used as a front for his own meth operation.

Gus actually had a pretty good thing going for himself over the first few seasons— at least up until he had to deal with getting half of his face blown off.

Now, we have yet another case of reality imitating art after authorities in Arizona discovered a tunnel being used to traffic drugs under the Mexican border hidden inside a KFC.

According to the Fort Worth Star-Telegram, the Department of Homeland received a tip that smugglers were using the abandoned restaurant to traffic narcotics and raided the property of Ivan Lopez after busting its owner with a cornucopia of drugs:

Police say they found 261 pounds of methamphetamine, 14 pounds of cocaine, 30 pounds of heroin and nearly 7 pounds of fentanyl in the trailer being pulled by Lopez’ pickup.

They might want to also check if he owns a laundromat.