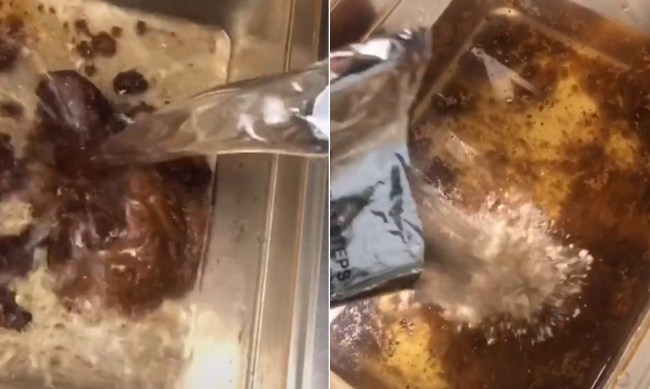 I don’t want to see a ban on TikTok but the videos revealing fast food secrets are ruining every restaurant for me.

The clip uploaded by user @cheddar4.7 begins with a zoom in on the “crackling” and goes into the step-by-step process of making the KFC gravy.

Cheddar wants people to know from the jump that it’s not poop in the bucket.

“This is not poop, it’s called crackling (chicken bits that come off while in the fryer and goes to the bottom and then its placed in the fridge),” explains the text on the video.

After gathering all the crackling, warm water is poured over the leftover chicken bits to break them up into liquid. The dry gravy mix is poured into the water, mixed, and slowly turns into a substance that resembles gravy.

The mixture gets popped in the microwave for nine minutes, mixed again, reheated, and then strained.

Finally, it is labeled and put into KFC gravy containers and stored in warm cabinets for up to six hours.

Some commentators seem completely cool with the gravy making process but the chicken bits combined with all that water just kinda makes my stomach turn.

Other people, probably home cooks, find this funny because this is exactly the process to make gravy at home.

“People in the comments obviously don’t know how gravy is made,” said commentor Lauren.

Sophie brings up a good point, stating, “People saying they won’t eat the gravy again but literally will eat the chicken it’s made with.