Maskless Woman Demands Mashed Potatoes And Fried Chicken, Threatens To Stab KFC Employee When He Refuses To Serve Her 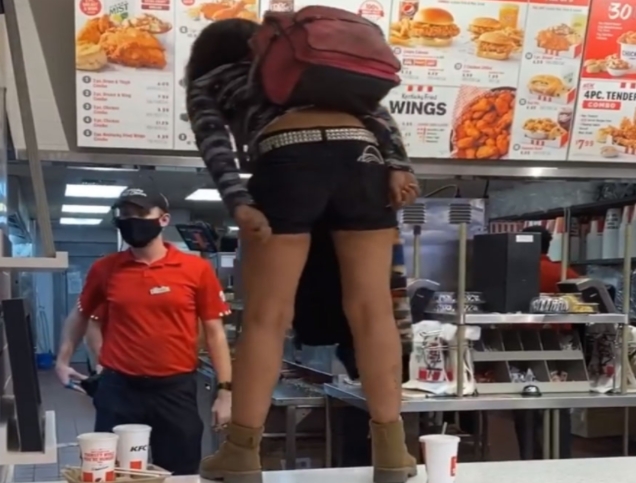 For the veteran boyfriends and married men out there, you are likely well-versed in the potential ramifications of when your sweetheart goes too long without food. The fallout of your significant other having their blood sugar level drop too low can turn even the most blissful darling into a raging demon, and it can happen in a matter of minutes. In fact, science has confirmed that “hangry” is indeed a real thing. These KFC employees in a viral video of a tense public freakout would likely verify that proper human behavior can disintegrate into brutish savagery if a person is hungry.

A woman entered a KFC to order mashed potatoes and fried chicken, as one does. However, the young woman was not wearing a face mask, which this particular establishment requires to get served. The woman took issue with the mask mandate, and demanded that she be served her fast food. That’s when things escalated quickly.

The meltdown continued as the maskless woman screamed at the KFC employees. When berating the workers didn’t charm them into making her food, she jumped on to the counter. The woman yelled, “Give me something to f*cking eat! I’m hungry! Now!” She continued her fiery diatribe as to why she needed fried chicken and mashed potatoes. At one point, she taunted employees to “call the f*cking cops then bitch!” Apparently, the woman never heard the aphorism: “You catch more flies with honey than you do with vinegar.”

One of the employees informed the woman that he can’t serve her since she isn’t wearing a mask. “I can’t give you anything to eat… you have to wear a mask,” the employee replied. “I can’t, I’ll get fired.”

The sweet talk did not entice the workers to serve her. So she threatened to stab them unless she gets something to eat. Which probably would diminish their abilities to drop the chicken in the fryer, plus do you really want blood pouring out of someone’s brachial artery into your mashed potatoes? I deduct that you do not. While KFC mashed potatoes are tasty, are they worth going to prison for attempted murder? Maybe you consider it for delectable mashed potatoes from Boston Market or Bob Evans, but at KFC, stick with the fried chicken.

Someone get Dora some damn chicken so she can go exploring. This woman is too young to be a “Karen.” Would you say that she is a “Becky?”

A wise man once said: “Modern problems require modern solutions.” Why doesn’t she walk through the drive-thru and place her order outside where she isn’t required to wear a mask?

This woman needs to think outside of the box or literally inside the box. This woman could have worn a KFC box face mask as this young lady did in Australia.

Get your PPE from KFC: Woman turns her Kentucky Fried Chicken box into a face mask https://t.co/HZgvKtEeaF