Could Killmonger Have Taken Thanos Down? Michael B. Jordan Thinks So And Details Why 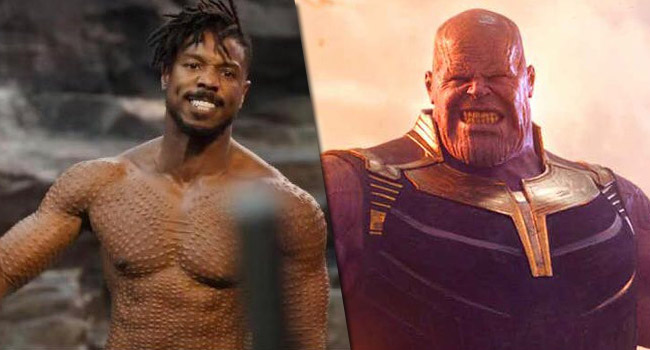 Here’s a fun hypothetical for you to ponder. Could Blank Panther villain Erik Killmonger, have beaten Thanos in a fight and saved the day (as well as several of our favorite superheroes) in Avengers: Infinity War if given the chance? The man who played the man, Michael B. Jordan, thinks so and even explained why.

If, arguably, the two best villains to ever appear in a Marvel film were to face off, Jordan has a very high opinion of Killmonger’s chances when asked about it by The A.V. Club.

“This is the first I’m hearing of it. I think the one thing about Killmonger is he really plans his attacks, and they’re well thought out. So if he ever stepped in a situation with Thanos, he would feel confident that he had the upper hand—at the very least, he would know he had a shot. So I mean, we already know that Erik’s willing to sacrifice himself for a greater good, so I don’t think he’s ever fearful of losing his life. So I think if he ever stepped in front of Thanos, he’d already have a plan for taking him down.””

Listen. I loved Killmonger. In fact, I liked him so much it’s almost hard to think of him as a villain. But yeah, no. Sorry, MBJ.

Thanos didn’t exactly struggle when faced with the combined might of Thor, Heimdall, Loki (who is probably still alive… maybe), and Hulk.

Something tells me that once Thanos actually ran into Killmonger, regardless of the plan, he’d just drop one of these on N’Jadaka and it would be game over.