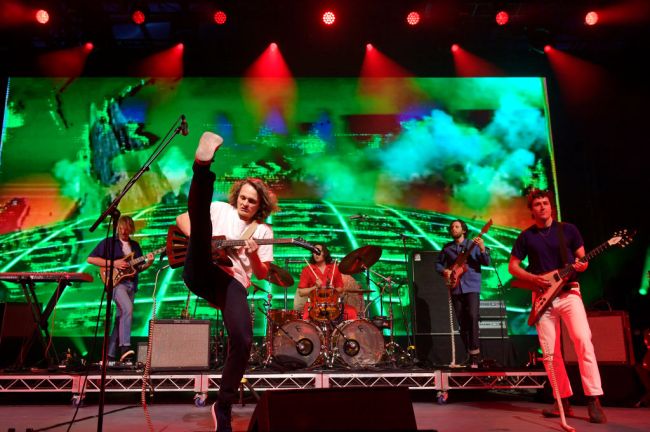 Coachella is, undoubtedly, the unofficial start of the summer music festival season.

Except, for many Coachella attendees, the music itself seems more of an afterthought to the vibe of the festival itself.

See, in the social media era, Coachella has earned a cultural reputation for being a bit of a scene. It’s heralded for being a convergence of the fashion world with the music world, along with lots of partying. There are plenty of genuine A-listers who attend. As such, the Coachella scene also attracts the see-and-be-seen crowd; human peacocks from the tony enclaves of Los Angeles or New York on a mission to farm clout for their respective Instagram and TikTok channels.

Not that there’s anything wrong with the ecosystem of experience > content > clout. It’s a formula that clearly works for the Extremely Online. But one’s intention of Coachella attendance certainly has to count for something – Are you going to have your mind blown by some of the best music of the modern generation? Or are you going to flood your neural receptors with dopamine while stoking your ego with digital vanity?

It drives music fans crazy when hard-working musicians play the proverbial second fiddle at a carnival of whose who and privilege. IE: Headlines about so-called VIPs attending “disastrous” Coachella-adjacent influencer parties that make the commoner roll their eyes into the back of their head.

Heaven forbid there be a *just a little* hardship in a luxe music festival fantasyland where someone’s social media follower numbers seem more significant than their actual talent.

But so the Coachella cultural echo chamber goes…

King Gizzard And The Lizard Wizard at Coachella 2022

This brings us to King Gizzard and the Lizard Wizard. The Australian sextet is set to perform both weekends at Coachella. Between the weekends, they squeezed in two shows at Brooklyn Bowl Vegas.

King Gizzard and the Lizard Wizard is one of the most exciting live bands to break out in the last couple of years. They tour aggressively, seemingly hellbent on growing a fanbase the old-fashioned way – with lots of unpredictable live shows and a plethora of new music. Their music is crafted with a certain brash attitude that’s both sonically ambitious and fearless. Fans want to buy their vinyl, go to their shows, and enter the gravity of their creative orbit again and again.

King Gizzard And The Lizard Wizard reacts to Coachella Week 1:

King Gizzard had a bit of a mixed experience at Coachella Week 1. The band tweeted that Coachella is “funny” on Friday. Then something went amiss with the previously scheduled live stream. King Giz fans stuck at home were unable to watch their set.

King Gizzard is not on the Coachella stream schedule anymore. I’m livid. Didn’t know I could hate Coachella more than I already did

word around the street is the set went really badly. there was a bunch of tech issues and the band didn't like it so they don't wanna air it.

it sucks but what can ya do.

King Gizzard And The Lizard Wizard reacts to Coachella Week 2

Fast-forward to Coachella week 2. The band threw out a glowing endorsement of the Coachella Week 2 experience. See, Coachella Week 2 is more proletariat. It’s traditionally easier for the commonfolk to get tickets, as passed aren’t gobbled up by the clout-happy influencers, entertainment industry types, and those who can write a three-day festival pass off for “work.”

King Gizzard tweeted, endearingly, “2nd Coachella is way more doper. Being in a band is fun. I love my friends.”

They followed it up with a blunt middle finger to the influencer class. The ones who ruin the whole festival’s entire vibe:

King Gizzard fans, of course, loved to see it. A few of the best tweets fired off in reaction:

King Gizzard and the Lizard Wizard gave a hell of a performance at Coachella Week 2. Fuck week 1! They didn’t even like week 1 which hyped us up even more. Even had a decent mosh pit and we were all fucking vibing. Best performance I’ve ever seen!!!! pic.twitter.com/8nXVrL4JsX

I’m stanning hard here, but I mean no hyperbole about Omnium Gatherum. In a statement, King Gizzard’s Stu Mackenzie called the project “our classic sprawling ‘double album.’ Our White Album, where anything goes.”

On a couple of spins, it’s just that good.

If you love music of any genre, you’ll enjoy the hell out of it.