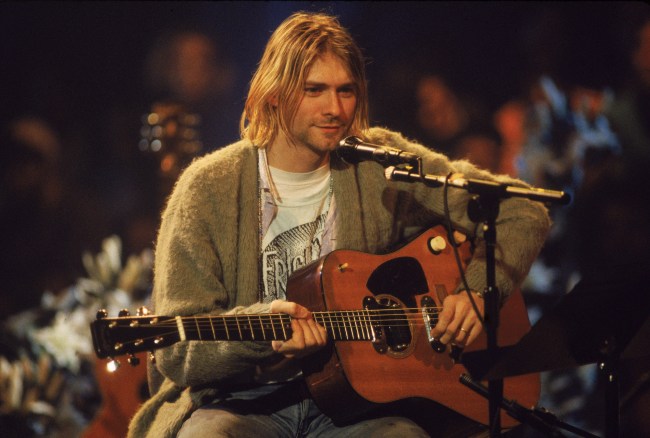 If you’re reading this, it’s too late, you’ve missed out on the opportunity to own one of the most iconic pieces of music memorabilia ever sold. Kurt Cobain’s iconic sweater was sold for a record price this weekend at an auction.

Cobain wore the olive-green cardigan during Nirvana’s epochal MTV Unplugged performance recorded at Sony Music Studios in New York City on November 18, 1993. The sweater was expected to sell for between $200 and $300,000, but at the end of the auction, the music memorabilia broke a record.

Kurt’s iconic mohair cardigan sold for $334,000 at Julien’s Auctions on Saturday, making it the most expensive sweater ever sold at an auction. The button-up sweater has never been washed since Nirvana’s legendary performance and has “original stains” that apparently increased the price. Darren Julien, president of Julien’s Auction, called it “the holy grail of any article of clothing that he ever wore.”

The description of the sweater: “A blend of acrylic, mohair, and Lycra with five-button closure (one button absent), with two exterior pockets, a burn hole, and discoloration near left pocket and discoloration on right pocket.”

After Cobain’s death, the cardigan was given to Jackie Farry, the nanny of Frances Bean Cobain and close friend of Courtney Love. She sold the iconic sweater in November of 2015 for $137,500, far outperforming the cardigan’s pre-auction estimate of $60,000.

Also during the auction, Kurt Cobain’s custom left-handed Fender Mustang guitar he used during Nirvana’s In Utero tour in 1993 sold for $340,000. In Utero would end up being Nirvana’s last ever tour because it was canceled after Kurt suffered a drug overdose in Rome on March 6, 1994. Then on April 8, 1994, a 27-year-old Kurt Cobain was found dead in his Seattle home after committing suicide. The guitar had previously been on display at the Rock and Roll Hall of Fame for many years.

Kurt’s sweater and guitar were part of Julien’s Auctions’ Icons & Idols: Rock ‘N’ Roll event from this weekend. There were 700 musical memorabilia auctioned off, including Elvis Presley’s 1976 Harley Davidson XLH Sportster 1000 motorcycle for $106,250 and The King’s 1974 Mercedes-Benz 450 SL Gold Coupe for $125,000.