Kyrie Irving Says This Season Was Like Living ‘The Life Of A Martyr’, Stephen A. Blows A Gasket In Response 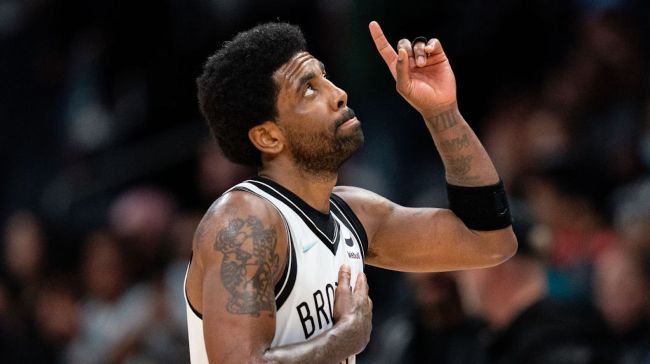 Brooklyn Nets point guard Kyrie Irving, who missed about half of the season due to his personal choices regarding vaccination, said during a recent interview that this past season was like living “the life of a martyr.”

Irving, Kevin Durant, and the rest of the Brooklyn Nets ultimately finished the season as the Eastern Conference’s #7 seed and were bounced out of the playoffs by the Boston Celtics in a four-game sweep in the first round.

According to dictionary.com, a “martyr” is defined as someone who a person who is put to death or endures great suffering on behalf of any belief, principle, or cause.” Irving, 30-years-old, is currently in the midst of a 4-year, $136 million contract that saw him earn a $34 million salary last season.

“I was not expecting a mandate to be brought down in the way that it wasn’t going to allow me to play at all. I had the opportunity to play away games still but there was no plan in place, there was no vision of how it’s going to work for our team, and I think that really impacted not just me, but a lot of people. Just had to sit in that hot seat and deal with it for a little bit, man — life of a martyr, bro,” Irving said.

Brooklyn Nets guard Kyrie Irving says he was living the "life of a martyr" when he couldn't play in home games for being unvaccinated against COVID-19. pic.twitter.com/y2FEZxQg2T

ESPN’s Stephen A. Smith, one of Irving’s most vocal critics over the last year or so, responded to the former Duke point guard’s comments on First Take and implied that Irving’s beliefs are delusional, which is something he’s taken to calling Kyrie in recent weeks.

ESPN's Stephen A. Smith blasts Nets guard Kyrie Irving for saying he was living the "life of a martyr" because he missed home games due to NYC's COVID-19 vaccine mandate:

"This brother, he really is on another level … He's in a stratosphere none of us are in." pic.twitter.com/tkbmAXrJuK

RELATED: Kyrie Irving Hilariously Says He Wants To Help ‘Manage The Franchise’ After Team Got Swept By Celtics