Lady Gaga’s Dog Walker Shot Four Times In The Chest, Gunmen Take Off With Two Of Her Dogs 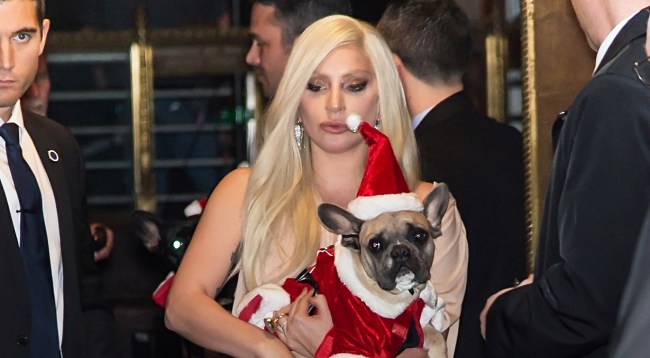 Lady Gaga’s dog walker Ryan Fischer was shot in the chest four times Wednesday night in Los Angeles by gunmen who stole two of her French bulldogs and took off into the night.

Seriously. This is a thing that actually happened. Dude was just walking some dogs and got popped in the chest not once, but four times.

The 30-year-old Fischer was walking Gaga’s dogs Koji, Miss Asia and Gustavo when he was shot outside of his home in West Hollywood at a little before 10 p.m.

Two of the dogs, Koji and Gustavo, were stolen in the shooting, while the third French bulldog ran away and was later located by police.

Fischer appeared to be alert and speaking to first responders after they arrived on the scene, reported ABC-7 News.

Law enforcement told TMZ they were not sure if the specific purpose of the shooting was to steal Lady Gaga’s dogs, but that French bulldogs are in high demand and expensive.

DailyMail.com states French bulldogs sell on average for between $1,500 and $3,000, but those with pedigrees such as Gaga’s dogs can go for as much as $10,000. So it is possible that the gunmen didn’t even know who owned the dogs when they took them.

Gaga, who is in Rome working on a movie, is reportedly offering $500,000 for the return of her dogs, “no questions asked.”

The suspects are currently still at large.