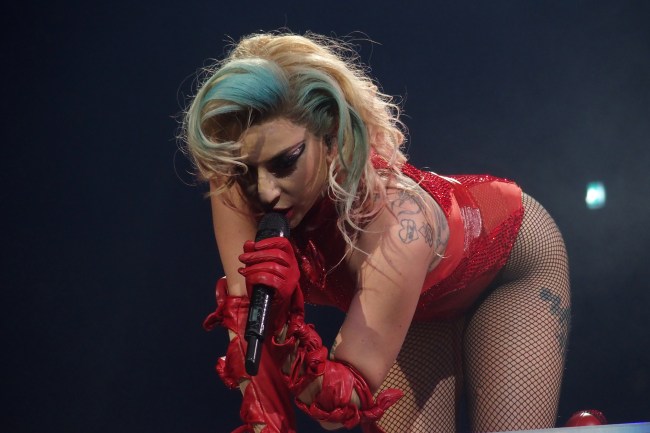 Here’s a nice challenge to take you into the weekend: Try to watch this video of Lady Gaga and a fan plummeting off stage jut one time. It has yet to be done.

But first, a little context: Gaga was performing in Las Vegas on Thursday night when she invited a superfan named Jack onto the stage. Jack provided a momentary burst of electricity after picking Gaga up and grinding with her before this happened.

DON’T WATCH IT AGAIN! HAVE SOME SELF CONTROL.

“Everything’s OK … The only thing that’s not OK is we need some stairs for the damn stage so I can get back up,” she said. Gaga also consoled Jack who burst into tears, asking him: “Could you promise me something? Could you forgive yourself right now for what just happened?”

Actually, upon further review, I’m not sure Jack was crying out of embarrassment, but maybe due to the sheer physical pain of his knee bending like one of those wacky wavy inflatable men outside used car dealerships.

A fan picked Lady Gaga up at her show in Las Vegas and dropped them both off the stage pic.twitter.com/qKBVc4VX3G

Gaga was unfortunate to escape unscathed seeing as in 2013, the pop star suffered a hip fracture that required her to get a replacement joint and in 2017, she announced she was suffering from fibromyalgia–a chronic pain condition that caused her to cancel a leg of her tour.

All’s well that ends well. Gaga posted this photo in an ice bath after the show.

P.S. I legitimately laughed out loud when I stumbled upon this tweet.

And yes I plan on seeing you in hell. First round’s on me.