Which Performance Enhancing Storyteller Do We Hate More: Lance Armstrong Or Mark McGwire? 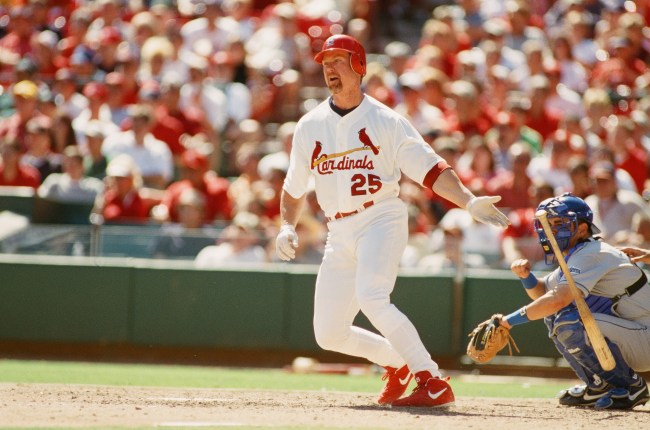 ESPN’s recent documentary run has been a godsend. The ’98 home run race. Armstrong’s Tour de France wins from 1999-2005. And of course, Michael Jordan’s ’98 title run. We’ve got the three principal players telling their stories from an arm chair, and each guy has raised his own share of controversial eyebrows. Still, the only people who hate Michael Jordan are anti-bullying activists and families cut apart by gambling addictions, probably, so there’s no point lumping him in under the hate-worthy consideration.

But Armstrong and McGwire share a similar story. Both guys captured the nation at the end of the 20th century with their respective races. Both guys broke, and set, records that many thought would never be broken. Both denied using steroids. Both later admitted to taking steroids. Both have watched their legacies crumble. And now we’ve had a chance to hear them tell their stories, some 20 years removed. Safe to say that both Lance Armstrong and Mark McGwire have had a lot of time to reflect.

In watching the Lance doc, it was hard not to hate the guy. He was a dick to everyone, and his apologies seemed forced and staged—as though he understood the importance of apologizing, but would not have been moved to do so without a publicist’s urging. He also seemed kinda manic and hyper, like he was scrambling to control the interview. Overall, I found him entirely unreliable in his answers. It wouldn’t surprise me if he were a pathological liar.

With that said, the documentary made it clear how much Lance actually cared about cancer patients and his foundation. It seemed as though he was genuinely, personally involved in the operations of Livestrong. Beyond that, the Livestrong movement was MASSIVE. He did so much good for so many people. In talking about the impact of his charitable work, you can’t help but recognize that the dude had no choice but to lie about his steroid use. The stakes were too high. The world simply couldn’t afford to have him become the villain, because we needed him to be a hero. And he knew that. That’s to Lance’s credit.

McGwire offers an entirely different profile. He’s quiet, circumspect, humble, as though he didn’t necessarily want the cameras and lights of a big production documentary to reopen the scars of his career. If you couldn’t see the size of his forearms, you might mistake him for a high school baseball coach in the midwest. Like Lance, he took steroids in a sea of competitors who also took steroids.

But America is baseball’s pastime, the ’98 home run race saved baseball, etc. etc. This wasn’t some guy flying around the Alps on a bicycle in a sport that nobody cared about until he came along. This was Mark McGwire breaking one of the greatest records in our nation’s sporting history, and doing so with a big fat asterisk. If you’re a baseball purist, you could argue that McGwire’s offense trumps what Lance did.

Eh. That’s thin and you know it. No surprise here: Lance is still the bigger asshole. Time will probably forgive McGwire, but Lance Armstrong will forever go down as a villain.