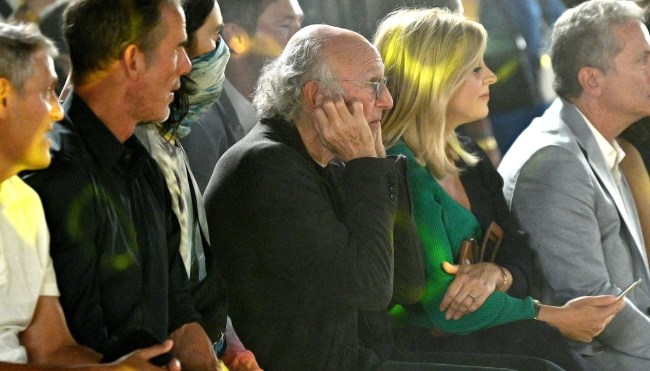 There is probably no one in the world who’s managed to become more beloved by expressing his vocal disdain for basically everyone and everything on the planet quite like Larry David, who played an instrumental role in the generational hit that was Seinfeld before playing a slightly exaggerated version of himself on Curb Your Enthusiasm.

Aside from being an effortlessly hilarious dude, I think most people love Larry David because he’s not only allowed but is practically expected to ignore common pleasantries and societal norms in favor of doing whatever he wants; hell, there are probably chefs out there that have served him a steak cooked rare instead of medium-rare in the hopes they’d get a good story out of it.

Last month, the comedian went viral thanks to an incredibly on-brand photo that was snapped during a show at New York Fashion Week that captured David plugging his ears while sitting in the front row (which unfortunately managed to overshadow the funniest part of the image: he was sitting right next to Jared Leto).

While plenty of people found the picture funny, his daughter did not feel the same way, as she said it was a “disturbing” photo of “a man who was dragged to someplace he doesn’t want to be.”

On Tuesday, David cleared the air during a wide-ranging chat with Jimmy Kimmel ahead of the upcoming premiere of the 11th season of Curb Your Enthusiasm (the part of the conversation in question kicks off around the 12:40 mark).

According to David’s account, he agreed to attend the STAUD fashion show after the designer’s fiancé told him his “presence would be helpful” (although he disagreed, saying “everything is better if I’m not there”). The explanation is about as straightforward as they come, as David said he was forced to cover his ears thanks to the volume of the music blaring inside the venue where he was “a little out of place.”