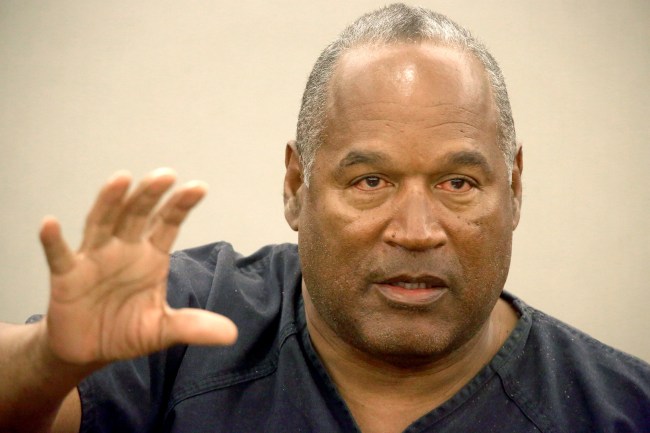 O.J. Simpson walks into your watering hole. Bad day for your doorman to call out. At 72, the Juice looks like he could still dismember you limb-by-limb. He plops down at the bar, takes off his baby glove, and begins sucking down extra bloody Mary’s.

A.) Phone the authorities.
B.) Minimize your chance at getting victimized by offering him a free shot.
C.) Treat him like any other customer.
D.) Hop in your white Bronco and high-tail it for the Canadian border.

The Cosmopolitan hotel bar in Las Vegas chose option C and it allegedly resulted in chaos.

According to TMZ, Simpson is reportedly suing the Cosmopolitan over a Nov. 8, 2017 episode in which he was kicked off the property following an alleged drunken incident at the hotel bar.

Hotel staff claims that O.J. was hammered and grew disruptive and confrontational with employees before breaking glasses at the bar.

Simpson denied the allegations and is claiming he’s entitled to $50,000 in a defamation lawsuit for the humiliation of the story and the smear of his good character.

But the Cosmo is calling BS … saying in new court docs Simpson’s reputation is already so bad, that the notion allegations of drunken shenanigans could make him look worse is LAUGHABLE!

Cosmo points out in court docs that “one major facet” of Simpson’s fame is “the fact that in 1997 he was held civilly liable for the wrongful death of Ronald Goldman and the battery of his ex-wife Nicole Brown Simpson.”
Cosmo also notes Simpson is a “convicted felon as a result of being held criminally liable by a jury in 2008 for a robbery that occurred at the Palace Station Hotel and Casino in 2007.”

I’m no lawyer, but I’m a conscious being with an interest in survival. My advice for the Cosmo would be to pay the man his fucking $50,000 and update your security system.