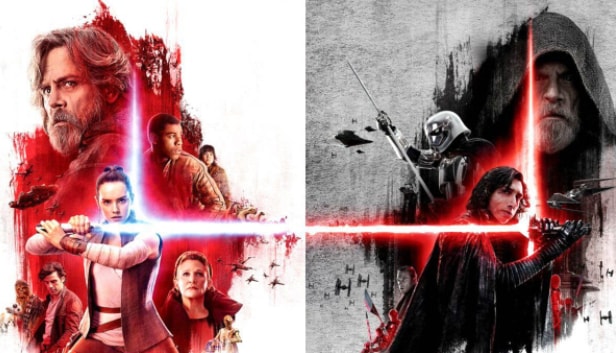 There are only 38 days, seven hours, and 23 minutes until The Last Jedi hits theaters. While we wait for the next chapter of Star Wars, the internet was overanalyzing Last Jedi posters that seem to hint that Luke Skywalker could be joining the Dark Side. New international TLJ posters feature Finn, Poe, Leia, Rose, and Rey wielding a blue lightsaber on the light side. The other side of the poster that is dark has Captain Phasma and Kylo Ren armed with a red lightsaber. Both sides have Luke Skywalker in the background and Mark Hamill poured Rhydonium on the fire.

"I've looked at life from both sides now
From light & dark & still somehow
It's life's illusions I recall
I really don't know life…at all" pic.twitter.com/0FVqbsbDzM

So is Luke Skywalker really going to join the Dark Side? In The Empire Strikes Back he told his dad, “I’ll never join you!” And that comes despite the rumors that the Dark Side has cookies. Conspiracy theorists nervously ask why Supreme Leader Snoke isn’t on the Dark Side of the poster instead of Skywalker.

But notice that the poster isn’t entirely black on the Dark Side? It’s more of a grey. Maybe Luke becomes a “Grey Jedi.” Then again, this could all mean nothing but to troll and cause misdirection heading into the highly anticipated Episode 8 of Star Wars. Hamill also shared another poster and quoted the 1968 Beatles song “Glass Onion,” where there is a line that trolls their fans for believing an urban rumor from a “clue” in a verse of the band’s song “I Am the Walrus” that Paul McCartney was dead and replaced with a doppelganger.

Hey you Dark Side theorists: Look who's looming at the back of the poster now! Another clue for you all… #TheWalrusWasPaul #WaitForVIII pic.twitter.com/ojizOaoYKu

“In Star Wars: The Force Awakens, Luke has lost confidence in his ability to make good choices. It haunts him to the core. But he hasn’t gone to the Dark Side,” Hamill said in an interview with the news-breaking Disney Rewards website. “This isn’t an evil version of him. But it’s still an incarnation of the character I never expected. It has pulled me out of my comfort zone. It’s a real challenge.”

I’m sure this line is a great shock to the audience, so you can imagine how I felt! This is a huge change for a character who once represented optimism and hope. It’s a radical decision to drop out of everything he’s ever believed in. The entire movie is filled with these kinds of jaw-dropping surprises, but you’ll just have to see the film itself to discover what they are.

So it sounds like Luke will not be joining the Dark Side anytime soon. But if those posters didn’t open your eyes, then there’s this poster theory that will shake you to the core.

the hidden meaning in the last jedi poster pic.twitter.com/06JraSwIjO

Star Wars: The Last Jedi screams into theaters on December 15.