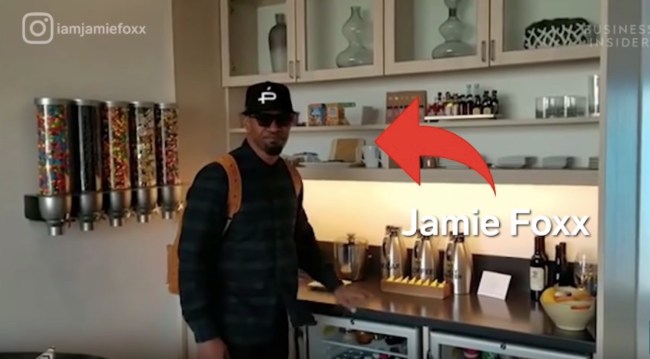 Being rich has its perks. For starters, you can buy your way into the most elite colleges in the world as was the case with the scandal unfolding in the news right now.

You live in the most luxurious houses, drive the most expensive cars, have access to world-class chefs whenever you’re willing to spend a small fortune on a meal, and can also skip pretty much any line you want.

Case in point, this private suite at LAX airport for the über wealthy that costs a few thousand dollars tacked onto the price of your flight. There are actually twelve of these suites at LAX that are frequented by celebrities like Jamie Foxx, and Business Insider got to take a look at what traveling is like when you’re wealthy enough to afford one of these suites. Check it out:

The security you pass through before getting to these luxury suites isn’t terribly surprising, it is an airport after all. That security isn’t there because of the celebs, it’s there because it would be an easy access point for an attack.

As for the amenities, it does seem pretty damn great. A BMW that drives you up to the plane? That sounds infinitely nicer than the handful of times I’ve gotten out of the plane on the tarmac and had to walk to the airport terminal in the rain, most recently in Portugal.

I can definitely see justifying spending a few grand on one of these suites if you’re a celebrity who is flying First Class on an LAX to NYC flight, or an international flight. Otherwise, this is a definite step down from the luxuries you might find at a private/VIP airport. The food and drinks found in these suites aren’t particularly great either. I’ve spent time in the AMEX lounge at LAX and the snacks were better than what I see on those shelves.