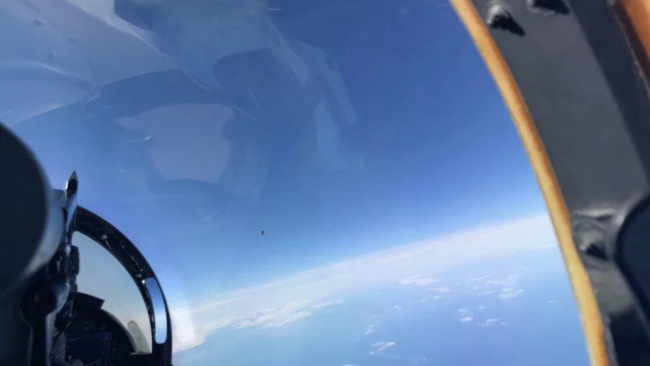 A newly leaked photo from a secret Pentagon task force shows a UFO flying near a U.S. Navy jet that military officials admitted could be “alien” or “non-human technology.”

The Debrief learned of the existence of the photograph from a defense official who has been verified as being in a position to have access to the UAPTF intelligence reports. Additionally, the same two officials with the DoD, and one from the U.S. Intelligence community with whom we previously spoke, confirmed that the leaked image is the same photo provided in a 2018 intelligence position report issued by the UAPTF.

The photo itself is said to be considered “Unclassified and For Official Use Only,” however, because the image and accompanying report were shared on a secure Intelligence Community network, the officials we spoke with would only acknowledge it under strict conditions of anonymity. Prior to any agreement, The Debrief did verify these sources were in fact in positions within the U.S. Intelligence Community and under the authority of the U.S. Director of National Intelligence.

The report lists possible explanations for the UFO, which appeared to be hovering at around 35,000 feet over the Atlantic Ocean, including speculation that the UAP was “alien” or “non-human technology.”

In response to the photo, Pentagon spokeswoman Susan Gough told The Debrief, “To maintain operations security and to avoid disclosing information that may be useful to potential adversaries, DOD does not discuss publicly the details of reports, observations or examinations of reported incursions into our training ranges or designated airspace, including those incursions initially designated as UAP.”

BREAKING: @Debriefmedia has learned of the leak of an unclassified photo, said to have been widely distributed in the Intelligence Community, which purportedly shows what the DoD has characterized as “Unidentified Aerial Phenomena.”https://t.co/z9iBnrtRAb

Susan Gough, you may recall, was involved in the Pentagon’s release of three official UFO videos taken by Navy pilots in 2004 and 2015.

Earlier this year, Eric W. Davis, an astrophysicist who worked as a subcontractor and then a consultant for the Pentagon UFO program stated that he had examined materials that “we couldn’t make it ourselves.”

Davis, who now works for defense contractor Aerospace Corp., also said he gave classified briefings to a Defense Department agency just this past March in which the retrieval and examination of “off-world vehicles not made on this earth” were discussed.

Also reported back then was the fact that there are a group of former government officials and scientists who were part of the United States’ Advanced Aerospace Threat Identification Program who are “convinced that objects of undetermined origin have crashed on Earth with materials retrieved for study.”

Two defense officials who spoke to The Debrief about this latest government UFO leak that the pilots who witnessed the object claimed it “was completely motionless and seemingly unaffected by ambient air currents.”

“In decades with the [Intelligence Community] I’ve never seen anything like this,” one U.S. intelligence official told The Debrief.