Leaked Video And Images Of UFOs Captured By The US Navy Are Real, Says Department Of Defense 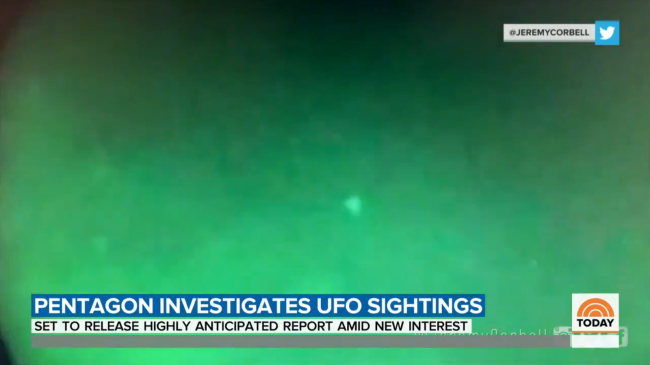 Last week, several photos and videos of unidentified aerial phenomena (UAP), AKA UFOs, were published on the internet by a couple of websites, Mystery Wire and Extraordinary Beliefs.

The images had actually been circulating on the internet since they were taken in 2019, but further research led to a classified briefing generated by the Office of Naval Intelligence (ONI) which contained numerous recent UAP cases with accompanying photo and video evidence.

Fast forward a week, and now a Pentagon spokesperson says those leaked photos and videos of triangle-shaped UFOs, reportedly taken by US Navy personnel, are authentic. Dun dun dun…

Pentagon spokeswoman Sue Gough admitted in a statement that photos of three UFOs – one “sphere” shaped, another “acorn” shaped and one characterized as a “metallic blimp” – were real.

“I can confirm that the referenced photos and videos were taken by Navy personnel,” said Gough.

“As we have said before, to maintain operations security and to avoid disclosing information that may be useful to potential adversaries, DOD does not discuss publicly the details of either the observations or the examinations of reported incursions into our training ranges or designated airspace, including those incursions initially designated as UAP,” Gough added.

Gough also revealed that the United States government’s Unidentified Aerial Phenomena Task Force has been investigating these videos and photos.

New details are emerging about a series of mysterious sightings over U.S. Navy warships in California. Video shows a strange object hovering over one of those ships, and now the Pentagon confirms it was taken by the Navy. @GadiNBC has the latest. 🛸 pic.twitter.com/YEIDcCkUjo

Speaking to Mystery Wire about the UAP images, Intelligence Committee Chairman Senator Mark Warner said, “One of the things that has changed, and I (have) received classified briefing on this, so I can only give you the top line is that the military has seen enough things where they’re actually now encouraging pilots to report. You know, if there are objects flying over military installations that could pose a security threat.”

Sen. Warner added, “If there’s something out there, let’s seek it out. It probably is a foreign power. But I think, you know, the past approach that the military had, which was the pilot saw something to kind of say, whatever you do, don’t record, it’s gonna look bad on your record. And now say, no, if you’re seeing things and if we’ve now seen there’s actual visual recorded evidence, we gotta sort this out.”

Mystery Wire also spoke to the ranking Republican on the Intelligence Committee, Senator Marco Rubio. He said, “The bottom line is that we’ve had now consistent reports of objects flying over military installations and military training areas. And it’s not the US government. And so anytime I see things flying over installations that are not ours, we need to know who they are. We need to know why they’re there. And that’s the way I focus on it.

“Other people want to speculate about other things that are more exciting. And all that sort of thing. And, you know, I don’t, we just don’t know what it is. I think at a very basic level, there are things flying over our military installations, or if there’s things flying over the skies of the United States, and we don’t know what they are, where they came from. We need to have answers to it. And we need to be working on getting an answer to it.”

Meanwhile, Tyler Rogoway of The War Zone writes, “We may not know the identities of all the mysterious craft that American military personnel and others have been seeing in the skies as of late, but I have seen more than enough to tell you that it is clear that a very terrestrial adversary is toying with us in our own backyard using relatively simple technologies—drones and balloons—and making off with what could be the biggest intelligence haul of a generation.

“While that may disappoint some who hope the origins of all these events are far more exotic in nature, the strategic implications of these bold operations, which have been happening for years, undeterred, are absolutely massive.”

That, or it’s aliens. One of those things.