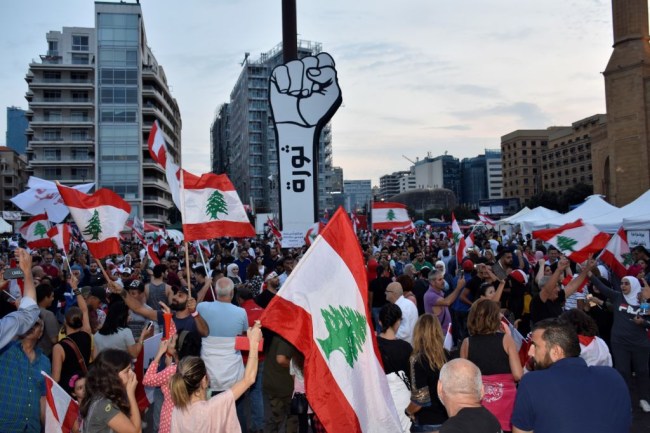 There are angry protests in Lebanon as the people are furious at their government for widespread corruption, a crumbling economy, and high taxes. The event that may have been the kindling that sparked the fires of political unrest could have been the news that the Lebanon Prime Minister gave $16 million to a South African bikini model.

Hariri met van der Merwe at The Plantation club and resort in Seychelles in 2012. At the time, she was a 20-year-old model from South Africa. She claims that the trip to the resort was “sponsored” so that she could “lend a sense of glamour and exclusivity.” Candice alleges that other models were flown into the luxurious resort. She claims that her and other models’ passports were confiscated, and they were instructed to not take any photos or tell any stories of what goes on there.

At the time of the encounter, Hariri was the 43-year-old married father of three who had abdicated his office of the Premiership and escaped Lebanon after the Syrian Civil War spilled over into his country starting in June of 2011. Hariri returned as the Lebanese Prime Minister on December 18, 2016.

In May of 2013, Candice received $15,299,965 from a Lebanese bank. The model also received two luxury cars, an Audi R8 and a Range Rover Evoque, said to be worth over $250,000, which her lawyer claimed to be provided by the same “extremely well-to-do Middle Eastern gentleman” who gave her the money. Candice van der Merwe was an energy drinks spokesmodel and appeared in the 2011 FHM Swimsuit calendar.

Saad Hariri’s net worth is $1.5 billion according to Forbes. Saad Hariri allegedly amassed his fortunes when he inherited a stake in Saudi Oger, a construction company his father Rafik Hariri built into one of the biggest in Saudi Arabia. Rafik Hariri was also the Prime Minister of Lebanon from 1992 to 1998 and again from 2000 until October of 2004. Rafik Hariri was murdered on February 14, 2005, by a suicide truck bomb in Beirut. Four Hezbollah members were indicted for the assassination.

Earlier this month, reports came out that Hariri paid his mistress, van der Merwe, nearly $16 million in a “donation.” The reason it became public knowledge is because the South African government sued van der Merwe after she failed to pay income taxes on the enormous financial payment. The tax revenue authorities became suspicious because van der Merwe’s wages for the entire year before the “gift” was $5,400.

The model alleges that the money was a gift and thus not taxable. The South African Revenue Service (Sars) froze Candice’s bank accounts. Then Hariri allegedly sent his mistress another $1 million to fight her legal battles and pay for living expenses.

In January, Van der Merwe reached a settlement with the South African government by paying $2.9 million. Then van der Merwe sued the South African government for $65 million, claiming that the financial investigation forced her to sell the property she had bought with gift money. The model also alleges that the legal battle hurt her career and caused her relationship with Hariri to fizzle.

“The plaintiff’s relationship with Mr. Hariri was terminated, which resulted in the loss of financial benefits that would have accrued to her from the relationship if it had been allowed to persist without outside interference,” the lawsuit allegedly states.

In a Washington Post article, Lebanese journalist Kareem Chehayeb wrote that the huge payoff to the model helped start the anti-government protests in Lebanon.

“Many were outraged after court documents from South Africa revealed last month that he spent some $16 million to cover up an affair in Seychelles back in 2013,” Chehayeb wrote. “Many unpaid workers in his construction and media companies were particularly furious, viewing this as a slap in the face. This week, there has been plenty of reason for all of this brewing outrage to come to a head.”

On October 17, 2019, the people of Lebanon took to the streets to voice their opposition to government mismanagement. Much of the frustration materialized after the Lebanese government announced a $0.20 tax on calls made via WhatsApp and other messaging apps.

The citizenry is also disgusted with how Lebanon’s economy has been handled. Lebanon has one of the highest debt ratios in the world, at $86 billion or more than 150% of the country’s gross domestic product.

Nationwide demonstrations have raged in Lebanon with massive anti-government rallies in Beirut, Tripoli, Tyre, and Baalbek in the last week, the largest protests in the country in over a decade.

The people are also unhappy about the country’s crumbling infrastructure, limited water supplies, garbage in the streets, and daily electricity outages that last for hours. Many of the Lebanese people are resentful against the political elites and have called for the resignation of the nation’s 30-member Cabinet.

Imagine that one of the reasons that your country started a revolution against the government is because the head politician paid off a bikini model?