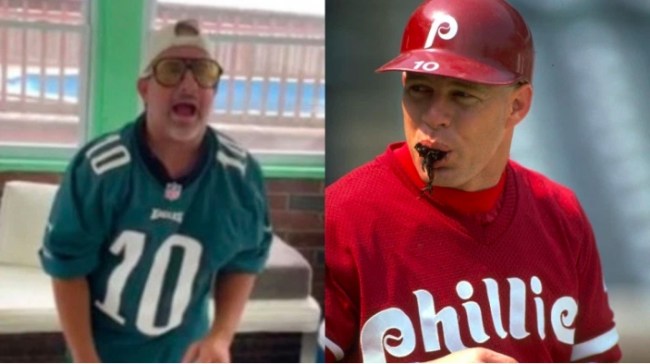 The 56-year-old World Series champion pulled out of his scheduled boxing match against Chris Morgan just one week before the event was scheduled in Atlantic City, New Jersey.

Dykstra’s attorney, John Pierce, gave a bullshit excuse for his client bitching out of the fight in a press release:

“Mr. Dykstra is withdrawing from his celebrity boxing match with Chris Morgan, the ‘Bagel Boss Guy,’ so that he can focus properly on preparing for his upcoming trial. The fight will not be rescheduled.”

Dykstra is the plaintiff in an upcoming trial after filing a $15 million lawsuit against L.A. County and multiple deputies claiming he was severely beaten while serving a jail sentence in 2012 for charges of grand theft auto and filing a false financial statement.

To make matters even more dicey, at the time of this writing, organizers of the celebrity boxing match claim that the match is still happening because Dykstra already received a payday and has been spending the past two weeks in a hotel on the organizer’s dime, the New York Post reports.

Celebrity Boxing promoter Damon Feldman told The Post that Dykstra never game him a heads up that he was backing out.

“It’s like he robbed us. He’s a bum. This is an absolute disgrace. It’s a black eye in the face of celebrity boxing.”

Pretty shitty move for a guy who acted so tough at weigh-ins.